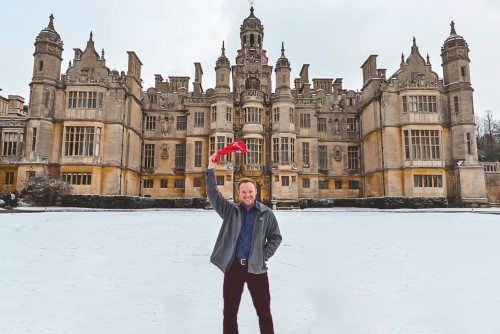 Bryson Keltner, a 2017 graduate of The Mahurin Honors College (MHC) at WKU, earned his degree in English with a concentration in Professional Writing and a minor in Journalism Writing. During his time at MHC, Bryson sailed through a diverse range of countries, received the Honors Citizen of the Year Award, and became a highly involved member of the Hilltopper family. In the present, Bryson is the International Recruitment Admissions Counselor for the Global Learning & International Affairs department. Read about his remarkable journey on the hill below.

"The Mahurin Honors College was one of the things that drew me to WKU. I knew I wanted to be part of a close-knit community and I knew I wanted to study abroad in college. The MHC prioritized both. In many ways, those two things surged my path at WKU, which led me to where I am today.

Like many, my Hill experience began at the Honors Freshman Orientation Retreat. While learning about Honors there was great, the connections were better. I recall meeting people that would complete their Honors journey with me, and I still call a few of them my absolute best friends today.

While living in the Honors residence hall, taking Honors classes, and soaking in a lot of life lessons, I began to grow and expand my network on The Hill. I became involved in a lot of ambassador programs and organizations, but one of the best experiences on The Hill was becoming an HonorsTopper, (the ambassador program for the MHC). I began giving personal tours, leading student admissions meetings, and working several recruitment events. I developed a passion for helping others become part of my WKU family–a passion that has stuck around.

My other passion was that other reason Honors drew me to WKU. I studied abroad by sailing on Semester at Sea my sophomore year. As someone who had never left the U.S. before, it was life-altering to take classes on a ship while sailing to 18 different countries. I learned so much about the world and myself. I discovered the wanderlust that still drives me. My experiences on SAS, my later involvement with the study abroad office, and my journalism background even helped me land a media internship at Harlaxton College in England after graduating from WKU.

I’m really grateful for the MHC and for all my connections at WKU. They not only helped me discover my passions, but they provided a way to turn those passions into a career. I currently work with recruitment and media operations within WKU Global Learning & International Affairs. It’s my job to help students from other countries come to WKU and to help WKU students study abroad. I often get to do what I love: travel the world and promote The Hill where I found a home. I have the MHC to thank for that."