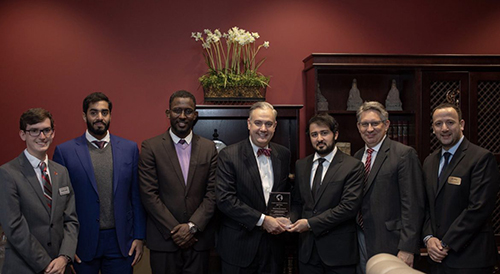 Doha, Qatar -- Aligning with the U.S.-Qatar 2021 Year of Culture, Western Kentucky University (WKU) is to name a room the QatarDebate Majlis.

The accolade reflects the efforts of QatarDebate – a member of Qatar Foundation – toward promoting a culture of debate and dialogue through various programs, in cooperation with WKU and several other American universities. QatarDebate seeks to promote the Arabic language and enrich the experience of its learners, by employing debate as a tool for developing their language skills.

2020 represented a milestone in the partnership between QatarDebate and WKU, as both parties were scheduled to sign a Memorandum of Understanding (MoU) in March on the sidelines of the 5th International Schools Debating Championship. The pandemic put a hold on those plans, yet both sides remained committed to the partnership, and signed the MoU in December 2020.

WKU President Timothy C. Caboni said: “The relationship between QatarDebate and Western Kentucky University is rooted in an infinite quest for knowledge. We value critical thinking in the rigors of reasoned discussion, through constructive and open dialogue.”

The agreement will provide a basis for future cooperation to spread the culture of debate and discussion in the Arabic language at WKU and in the U.S.

Dr. Hayat Maraafi, Executive Director of QatarDebate, said: “In the fall of 2020, we worked with WKU to offer debate skills courses to students, with a focus on developing their Arabic speaking skills.

“After the success of the first U.S. Universities Arabic Debating Championship 2019, QatarDebate will be organizing the second edition of this tournament in 2021, with final dates to be confirmed.”

“We’ve been welcoming students from Qatar to WKU for more than three decades, and we are thankful for QatarDebate for hosting Western Kentucky University students, both in Doha and in the United States,” President Caboni said.