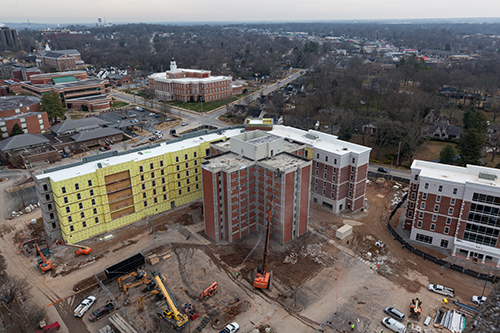 A nine-story residence hall that was dedicated at WKU back in 1967 is slowly being demolished.

It’s a bittersweet step for some former students as WKU’s Amy Bingham reports in this week’s View from the Hill.

“I do feel like there’s something special about Barnes Campbell.”

“I did so much growing in Barnes Campbell Hall and I made such good friendships with people that I’ll never forget that I was just really sad to see it go.”

Bacon, who is now a teacher in Louisville, spent three years living in Barnes Campbell, two as a Resident Assistant.

“I cherish all of my time as an RA there. I think a lot of that actually really prepared me to be a teacher as well.”

“It was all freshman boys. I mean just a bunch of boys who hadn’t been away from home for very long ever. You know trying to figure out how to be adults.”

Alum Doug Tate who currently serves as the director of Hugh Poland Hall was also deeply impacted by his time as an RA at Barnes.

“It was definitely where I kind of took that passion for working with students and really enjoyed it.”

“I lived there for two years. I’ve lived on campus now for another five years.  I’ve seen Barnes every single day so it’s going to be a little weird to walk out my door and not see it.”

Named for former regents Sheridan Barnes and Donald Campbell, the residence hall was built, along with Bemis Lawrence Hall back in the 1960’s.

Bemis came down in 2019 to make way for two new residence halls that will anchor the First Year Village.

“We knew when we started the project that we could build around Barnes here and allow that building to stay up thought the construction period.”

Reagle says this week’s demolition was originally planned for last August but COVID-19 prompted another use for the facility.

"We quickly back tracked on that when the whole quarantine thing began to evolve and  we just said we are gonna need more beds than what we’ve got.”

Now as the bricks come down amid the new construction, it’s a chance to tie the past, present and future together at the same time.

“Every story I’ve heard of from Barnes from everyone  who lived there or worked there really enjoyed that bonding aspect.”

Reagle says the area where Barnes Campbell Hall is located will be transformed into greenspace in the First Year Village.