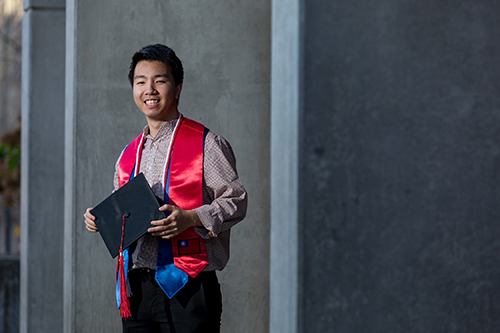 As the date of his graduation from WKU approaches, Reuben Tang of Glasgow is already feeling nostalgic, bittersweet and grateful.

“The end of my journey approaches, and as I look across this beautiful campus one more time, I'm reminded of all the wonderful friends, professors and experiences I've encountered along the way,” said Tang, who graduates this week with degrees in Architectural Science and Chinese.

"I can't describe how fortunate I am to have come to WKU for college. Synonyms such as lucky, opportune or serendipitous, they all pale in comparison to the fullness of my feelings. Attending WKU changed my life, and when I graduate I’ll look back upon my time at WKU with fondness and nostalgia," said Tang, who also is a student in the Mahurin Honors College.

His family left China “in search of a better life and to chase the American dream.” Tang was born in the Chinatown section of Manhattan but later moved to Glasgow at age 6 when his parents Yue Rong Li and Zhen Tang took advantage of an opportunity to open a food business in the Barren County community.

The opportunity for international study and a diverse campus community attracted Tang to WKU. “The chance to go abroad and to learn about different cultures? What could be more exciting than that?”

Tang’s interest in architecture was built on the perspective of growing up around New York City’s soaring skyscrapers and Glasgow’s smaller buildings. His interest in Chinese developed when he learned about WKU’s Chinese Flagship Program and the study abroad opportunities it provided.

“The Chinese Flagship Program was where I really started to get my feet off the ground in college,” Tang said.

“I met great peers and advisors who cared about my growth and believed in me. As they continued to believe in me, I went abroad and had numerous experiences that made me more confident as a person, a person with individual thoughts and ideas about the future. I learned how to interact with people from different cultural backgrounds, developed my cultural sensitivities, and made everlasting friendships for life.”

With help from WKU Office of Scholar Development, Tang earned nationally competitive scholarships to fund study abroad experiences in the International Chinese Language Program at National Taiwan University in Taipei, Taiwan; the year after, he journeyed to Taiwan once again for an internship with architectural firm Kris Yao Artech in Taipei.

“Study abroad improved my self-esteem, self-acceptance, my understanding of the world and my place in it.”

Through his experiences abroad, Tang realized that his world and opportunities weren’t limited to Kentucky. “After coming home to the U.S., I was elated to discover that my world had broadened a bit. After all, I’m a small person living in a big world."

Tang hopes to build upon those experiences by seeking national scholarships to fund opportunities in the U.S. Foreign Service with United States Agency for International Development. “I envision a life in public service, where my leadership could create real and sustainable impact to make a measurable difference in the lives of others. This is my wish, but fate is a tricky lady, who knows what will happen next in life?”

#WKUGrad series: As part of our #WKUGrad series, WKU News shares articles on graduating students. See all of their stories at https://www.wku.edu/news/articles/index.php?view=default&categoryid=799&multinewsid=187.