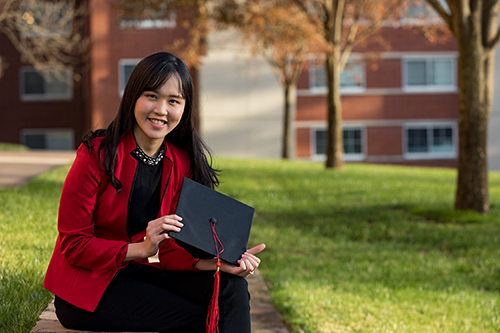 Xuan ‘Kate’ Ngo, a senior from Bien Hoa, Vietnam, who majored in accounting and finance, graduates next week with a bachelor’s degree, certificate in Advanced Professionalism, job offer, and multiple real-world experiences under her belt. She plans to jump straight into the last semester of her master’s program this spring through the WKU JUMP Program in Accounting.

Ngo always possessed a strong aptitude for mathematics. She attended a high school for gifted students in Vietnam and majored in mathematics before coming to Bowling Green as an exchange student during her senior year of high school. She said that while growing up her family often encouraged her to pursue a career in accounting, but she wasn’t interested because she didn’t think it would be exciting.

“When I came to the United States, I learned that accounting isn’t just doing the same thing at a desk over and over again. It’s more than that,” Ngo said. “I’ve experienced what it’s really like through the internships I’ve completed, and it’s not just about the work you’re doing. It’s interacting with people, your team and your clients. You learn new things every day. I also like the nature of accounting. I’m a detail-oriented person, so it’s a good fit for me.”

Ngo started as a business administration student, but soon recognized that her interests were in accounting and finance.

The WKU JUMP Program in Accounting was an added bonus for Ngo. She didn’t know about it when she first declared accounting as a major, but once she learned about it, she decided to pursue her bachelor’s and master’s degrees simultaneously as it fit her career plan to become a certified public accountant.

Ngo got involved with different organizations during her freshman year, and after a couple of years of coursework, she began applying knowledge in her field through student organizations.

After being involved in WKU ENACTUS for a couple of years, Ngo began working as the organization’s chief financial officer. WKU ENACTUS is an entrepreneurial student organization sponsored by the WKU Gordon Ford College of Business. It is part of the worldwide ENACTUS movement, which solves local, regional and global problems through entrepreneurship.

“As a CFO, I was in charge of keeping the book updated, reimbursing members for organizational expenses, collecting membership fees, preparing the budget for the organization and basically being in charge of the financials. I was able to use my accounting knowledge to create these Excel worksheets to keep up with the financials for the organization. That was pretty fun,” Ngo said. “I enjoyed being part of WKU ENACTUS. One of my favorite projects was the Bowling Green Night Market. We helped create the Night Market event in downtown Bowling Green. The purpose was to attract more traffic to the downtown area because there was a need to revitalize the area. There was a lot of success with that project.”

Ngo has also obtained unique experiences working in accounting and finance for a not-for-profit organization through her role on campus as treasurer for Beta Alpha Psi, an honor organization for financial information students and professionals.

After gaining experiences through student organizations, Ngo was ready to take on a few internships. The past two summers, she worked as an intern at Cummins Incorporated in Nashville where she got a glimpse into the world of private accounting.

“At Cummins, I interned with the finance department. I learned about how companies use credits and debits and how they record different transactions. It was really cool to see how they use accounting in the real world,” Ngo said.

This year during tax season, she interned in Nashville at one of the Big Four accounting firms, Ernst & Young. There, she received more than just internship experience. By the end of the internship, she not only obtained a strong working knowledge of public accounting, but she also received a job offer for a full-time position. She plans to begin work as an audit staff member with the firm next fall.

“It was a big learning curve for me because it’s a totally different career path compared to private accounting. For public accounting, I was an audit intern. During the two-month internship, I worked with three different clients and helped prepare different audit procedures for those clients,” Ngo said.

Ngo said that something that stands out about her time at WKU is the faculty and staff that have helped her along the way.

“I think the professors are really knowledgeable and they also care about the student’s wellbeing,” Ngo said. “Besides giving these lectures, they are also trying to get students involved in applying for internships and going after full-time job offers. One thing I learned from my professors was to get out of my comfort zone. This is the big thing that my professors pushed because there is so much more to learn once you get outside of your own bubble.”

Being an international student, Ngo said that it felt tough to be away from home at times, but that she relied on a strong support system at WKU.

“Meeting friends and the college’s faculty and staff are some of the best memories I’ve had throughout my college career because I am here by myself. My family is back home. It’s really tough to live in a country that is a totally different place than your home country,” Ngo said. “Friends, faculty and staff are the people who help support me a lot. They’ve helped me through different tough times throughout my college life. That’s been the best part. I’ve really appreciated them.”

Ngo also made connections with the staff in WKU Global Learning & International Affairs and provided support to other international students as an International Student Diplomat.

“I was an International Student Diplomat for two years and helped lead the International Student Orientations every fall and spring. I would guide international students by giving the orientation tour around campus. I helped show them the resources that WKU can offer students,” Ngo said. “What I really liked about the program was that we were able to house these cultural events with a purpose to engage international students. I know for me, as an international student, there were a lot of challenges with things like trying to get involved on campus because of cultural differences, language barriers and other things like that. It was really important to create these events for students to join, meet and greet with other students, and to just get involved on campus.”

In addition to finishing up her master’s program in the spring and preparing for her full-time position with Ernst & Young in the fall, Ngo said studying for the CPA exam is next on her to-do list for the upcoming year.

For more information about the WKU JUMP Program in Accounting, visit: https://www.wku.edu/accounting/professional-program-in-accountancy.php.

For more information about a major in Finance, visit: https://www.wku.edu/finance.

For more information about a certificate in Advanced Professionalism, visit: https://www.wku.edu/cap.

#WKUGrad series: As part of our #WKUGrad series, WKU News shares articles on graduating students. See all of their stories at https://www.wku.edu/news/articles/index.php?view=default&categoryid=799&multinewsid=187.