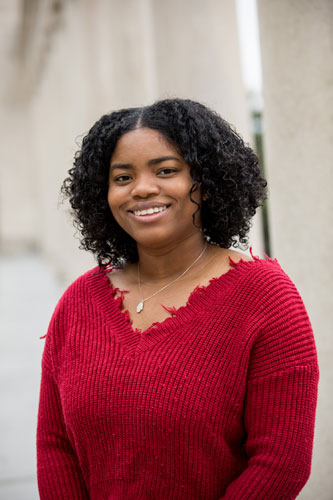 When searching for a student who embodies the WKU spirit, look no further than Nyla Rogers, a senior from Winston-Salem, North Carolina, majoring in criminology and Chinese.

Rogers is an active presence all over campus. She serves as chapter president of Zeta Phi Beta Sorority Inc., where she has managed, planned and created events to serve the community.

“Being a part of this organization has taught me how to be more confident in myself and what I have to offer to the world,” Rogers said.

Rogers is also active in WKU Housing and Residence Life. She serves as a resident assistant in Minton Hall. Through this position, she serves as a resource to her peers and plays a key role in ensuring student success.

Rogers is also active with the Intercultural Student Engagement Center Academy. She said ISEC has fostered the growth that has made her into the successful young woman she is today.

Rogers said her experiences in Potter College of Arts and Letters (PCAL) have not only helped her academically succeed but help others too. With the array of classes the college offers, students are able to expand on subjects both inside and outside their major. Rogers said her favorite class in PCAL had been the criminology course “Homicide and Serial Homicide” with Dr. Carrie Trojan.

Along with criminology, Rogers is developing her skills as a global citizen by studying Chinese. Through the Department of Modern Languages, she has studied abroad in China twice – spending three weeks in Tianjin and two months in Shanghai. She has also spent three weeks studying abroad in Italy.

When discussing her time in Shanghai, Rogers said, “that was one of the best experiences I had while studying abroad as my language skills became significantly better.”

Rogers’ aspirations extend far beyond campus – in fact, they cover the entire world! After completing her studies, Rogers hopes to work for either the FBI or the United Nations. She is determined to make a positive change in this world with her background at WKU and PCAL.

Rogers’ successes – both on and off the Hill – have prepared her to make an impact at WKU and across the world. The future is bright with leaders like her.