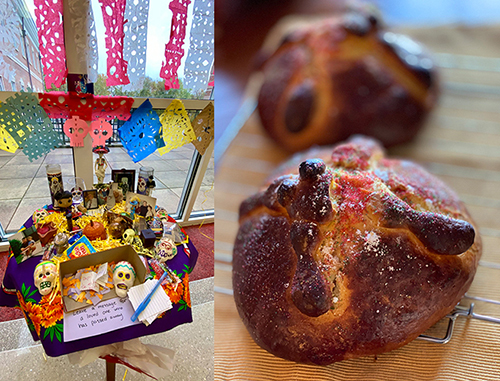 Students from the WKU Spanish Program collaborated on the creation of a traditional altar de muertos for this year’s celebration of the Día de Muertos, Day of the Dead, a Hispanic tradition that honors the dead on the days that the gates of heaven are opened to allow the spirits of the deceased to rejoin their families. A combination of Aztec rituals with Catholicism, the altar de muertos allows people to remember with great respect those who have passed but have never been forgotten. On the altar, along with the images of the loved ones, participants place their offering in the form of food, flowers, and other objects that have a special connection with the departed.

"It is important to remember our ancestors by bringing them back to life on these days, showing them that they are still in our hearts,” says Dr. Melissa Stewart, Professor of Spanish, whose father died this summer. "I put some popcorn next to his photograph because it was a tradition for him to eat popcorn every Sunday.”

This year students participated in a papel picado contest to decorate the altar with handmade perforated paper in different colors. The holes in the tissue paper allow the souls of the dead to travel through and visit the loved ones on Earth. The altar also includes sugar skulls (calaveras) made by students from the Spanish Club to represent the people honored on the altar.

Another important component of the altar is the pan de muertos, the bread of the dead, a sweet bread that resembles a skull with crossbones and is offered as food to the hungry souls coming back to pay a visit. "I like to make pan de muertos for this celebration not only to offer it to my late father, but also because I love this sweet bread a lot," says Dr. Inma Pertusa, Professor of Spanish, who has been looking for the perfect recipe for this type of bread for many years. "I have finally found a great recipe by Chef Dianna Kennedy, the guru of Mexican cuisine. This bread takes long time to make because it requires to let it rise twice, but it really has the taste of the traditional bread for this day."

The celebration of the Day of the Dead goes on for several days, starting Oct. 27 and lasting until Nov. 2, with each day dedicated to the arrival of the souls of different loved ones: pets, people that died violently, forgotten souls, children, and adults. However, the Spanish Program’s altar will be on display in HCIC (on the second floor at the top of the staircase) until Wednesday, Nov. 4. "We wanted to add a day for all those that have died due to COVID-19," says Dr. Pertusa. "We invite everybody to leave a message to a loved one that has passed away on our altar to let them know that we are working together to fight this virus that took them away from us."