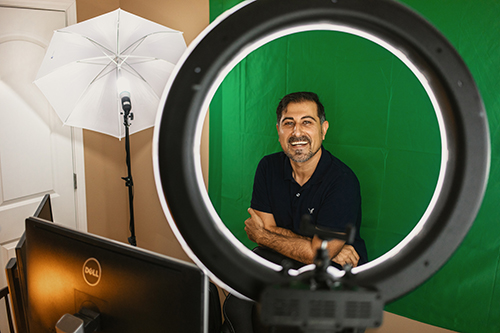 Dr. Ozkan Ozer, an assistant professor of Mathematics at WKU, has found a simple formula to solve the complex problem of student learning and retention in calculus courses. Preparation plus demonstrations plus recording plus editing equals several hundred videos available at his webpage, YouTube channel and Instagram account: MathByDrOzz.

“If I can help a student see the fun side of calculus, that is a success,” Dr. Ozer said.

Since February 2019, Dr. Ozer has produced more than 700 short Calculus and Differential Equations videos at his home studio after COVID-19, and beforehand at CITL’s recording studio (with the assistance of instructional designer Andrew Swanson).

Dr. Ozer has been developing his own Wolfram’s Demonstration Projects, in addition to the recently popularized Desmos and Geogebra simulations. With its rules, formulas and derivations, calculus can be overwhelming for some students, he said. “Without simulations it is so dry. Someone should show them the good side of calculus with visuals and make it more fun.”

That’s what prompted Dr. Ozer to begin recording recitation videos to help students learn the rules and practice the skills.

Dr. Ozer has produced more than 600 videos for his WKU On Demand Math 136 (Calculus I) and 137 (Calculus II) courses, his semester-based Math 136, 137 and 331 (Differential Equations) courses, his YouTube channel and Instagram account (MATHBYDROZZ). Cengage, a textbook publisher, also partially acquired the rights of around 100 videos Dr. Ozer recorded only for them. These videos are blended in their e-book via the platform called WebAssign, a student assessment system, and accessed by approximately 165 countries and territories around the world.

“This has been a long project,” he said. “Everything started with recording recitation videos for calculus sections because recitations are the biggest problem for calculus sections. Students give up at some point so we don’t want students to give up. I was simply recording videos at my WKU office using a ring light with stand and an iPhone in front of a whiteboard. Then, I discovered the CITL studio and its lite-touch board technology they have been using. After recording 175 videos there two summers ago, I started recording videos at my home office since it is 10 times easier having a green screen technology set at my home studio. Since then, I have speeded up substantially in recording and reached over 700 videos in less than two years. It was a long learning curve to adopt all of this technology.”

A nationwide Calculus survey by the  Mathematical Association of America released in 2016 showed the quality of recitation sessions and retention in Calculus I courses were significant issues. “The big hurdle is calculus has a series of four courses,” he said. “Calculus I is the beginning of that. If someone gives up there, there is no way to push them toward other calculus courses.”

In his short videos, Dr. Ozer solves examples with demonstrations. “They want to see you do the problem step by step with eye contact.”

Student feedback from a survey, conducted for a research project by Dr. Ozer and WKU Associate Professor of Mathematics Dr. Natasha Gerstenschlager, shows most are satisfied with the overall quality of Dr. Ozer’s video demonstrations and explanations compared to other instructional video series such as Khan Academy. Students said the videos contributed to their achievement in meeting learning objectives.

Dr. Ozer is hoping to expand his work with Cengage and create more videos for his YouTube channel. Additionally, a new website www.mathbydrozz.com, is under construction.

“My priority is always recitations,” he said. “Right now I’m doing lecture videos as well, but keeping them as short as possible with simulations and more visuals.”

In addition to WKU students, Dr. Ozer’s videos are viewed by a global audience. Currently, his videos have reached more than 65,000 YouTube and Instagram users. “My intention is to make as many videos as possible publicly available,” he said.

“I want this to be going all over the world. Everybody in the world needs good resources, and not everyone has good computers or internet connection, so there should be something free. My long-term goal is to get funding from the National Science Foundation to produce open-source demonstrations and simulations from Trigonometry and Calculus to Advanced Differential Equations and Linear Algebra.”

For anyone interested in designing similar videos, Dr. Ozer will share his experience and insights on pre- and post-production.