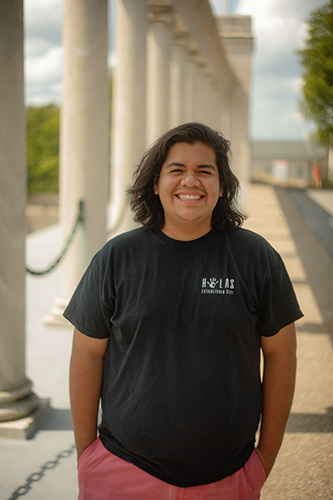 Music Education major David Trejo-Mendoza was born in Mexico City and moved to a town just north of Nashville named Springfield, Tennessee in 1999. Due to the influence of the vibrant neighboring city coupled with his natural inclination, Trejo-Mendoza discovered his love for music at an early age.

“I have always been musically inclined but knowing that I can help guide young musicians and be a positive influence in their lives is something special that I wish to do for the rest of my life,” Trejo-Mendoza said. He hopes that with his teaching degree he will become a band and choral director and states that he would like to eventually work his way to a college directorial position. “I can't wait to finally get out there and put everything I’m learning and know into practice – I want to help guide students and show them how to flourish as musicians,” Trejo-Mendoza said.

While he anticipates graduating in 2022, the college experience once seemed like a far-off dream. As a Tennessee resident and a recipient of Deferred Action for Childhood Arrivals (DACA), Trejo-Mendoza notes that it would have cost him nearly triple the amount his friends were paying to attend a school near his home. It was not until he heard about WKU’s Tuition Incentive Program (TIP) that he felt the promise of a college education. “It was always my dream to go to college, even though it did seem quite bleak at times. I am very grateful to have the opportunity to be here and am enjoying my Junior year so far,” Trejo-Mendoza said.

With mitigation efforts in place due to COVID 19, it has been an interesting start to his third year, but he is pleased to see WKU moving forward with celebrations such as Hispanic Heritage Month. In Trejo-Mendoza’s words, Hispanic Heritage Month is a time to share Latin cultures with the world. “It allows people outside of our cultures to get a sneak peek of our way of life so that we can come to understand each other better and grow closer” Trejo-Mendoza said.

A tradition Trejo-Mendoza and his family still uphold each year is making tamales on Christmas day for his whole family. “She [my mom] also used to allow us to stay home from school on Día de los Niños,” Trejo-Mendoza said. While at WKU, Trejo-Mendoza is involved in the Big Red Marching Band, Choral Society, and the WKU Jazz Band. He also previously served as the Vice President of WKU HOLAS, or Hilltopper Organization of Latin American Students, which addresses social, political, academic, cultural, and educational strengths and concerns of the WKU Latin American community.