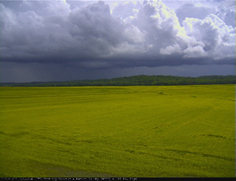 The recent visit of cooler, drier air across Kentucky has provided a break from the summer weather pattern that has brought humid conditions and frequent rain. And state climatologist Stuart Foster says if you think Kentucky’s climate is becoming wetter, you’re probably right.

Since the remarkable flash drought of September 2019, when Kentucky experienced its driest and second warmest September on record dating back to 1895, statewide precipitation has averaged above normal in every month.

For the first eight months of 2020, Kentucky averaged 43.81 inches of precipitation statewide, more than 10 inches above normal, according to data from the Midwestern Regional Climate Center. “While amounts have varied from place to place and we have dried out over the past few days, 2020 is still on track to threaten the record of 64.35 inches for the most precipitation in a year set in 2011,” said Foster, director of the Kentucky Climate Center and Kentucky Mesonet at WKU.

Normal annual precipitation averaged statewide is 47.90 inches, but this figure is expected to increase when the new climate normals are released next year by the National Centers for Environment Information in Asheville, North Carolina. “Climate normals are updated every 10 years,” Foster said. “The current normals reflect precipitation data for the period 1981-2010. Next year, the 1991-2020 normals will be released.”

The decade of 2011-2020 has been extraordinary wet across Kentucky. “Three of the five wettest years on record (2011, 2018, 2019) have occurred over the past decade,” said Foster. “When the new precipitation normals are released, Kentucky’s annual statewide precipitation normal is likely to increase by about 5 percent to over 50 inches per year. That would be the largest change over any 10-year period and the highest value since data have been collected.”

While the increase in precipitation is significant, it does not mean that the risk of drought has decreased. “Over the past 10 years, Kentucky experienced multiple droughts, including extreme drought in western Kentucky in 2012 and notable flash droughts in the fall of 2016 and 2019,” Foster said. “Water is a valuable resource, and given the inherent variability of our changing climate, our ability to manage it effectively will become increasingly important.”