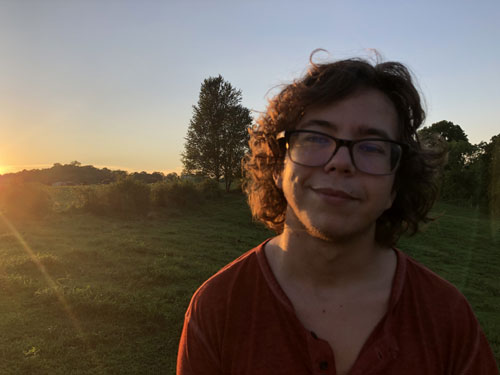 Zane Meyer-Thornton, a junior photojournalism student from Los Angeles, California, received a $10,000 scholarship from the Facebook Journalism Project and the Native American Journalists Association (NAJA) for the 2020-21 academic year - a notable award he attributes to his experience at WKU.

According to the Facebook Journalism Project website, the corporation plans to give $50,000 in scholarships each year for five years to the Native American Journalist Association and four other national organizations. As a member of the Cherokee North American tribe, Meyer-Thornton became one of five students who received the award this academic year and the only Cherokee.

Meyer-Thornton, who transferred to WKU in fall 2019, acknowledged the scholarship award meant a lot to him because he came from California to Kentucky hoping to make a jump in his skills. “Seeing all my hard work and sacrifices pay off, it meant a lot to me,” he said.

By hard work and sacrifice, Meyer-Thornton refers to all that came with transitioning to Kentucky from California.

His father, a now cancer survivor, encouraged him to advance beyond his photography job at the time. “After he got better, I knew that I wanted to get my degree for him and also for myself. But, I thought to myself, if I am going to do this, I am going to go to the best place that I can, and Western was that school for me,” Meyer-Thornton said.

WKU Photojournalism Professor James Kenney taught Meyer-Thornton during his first and second semester on the Hill.

“He came to us with some solid experience under his belt. I think his move across country to be a part of WKU PJ’s program was one of wanting to refine his skills in still photography and develop his video documentary and reporting/writing skills. He is definitely one who ‘gets it’ when it comes to an understanding of documentary storytelling,” Kenney said.

Meyer-Thornton joined the WKU Herald in spring 2020 working as a staff photographer. This fall he serves as a multimedia editor, where he collaborates with other editors, helps oversee the staff photographers, distributes assignments, and assists in their skill development.

“The Herald is just a really great opportunity. I think that most people that go through the stages of the Herald, working as a staff photographer or writer and then going up to an ed (editorial) board position, it really prepares you for the real world. It is a really great opportunity. It was one of the things that I was really looking forward to doing when I first transferred over here,” Meyer-Thornton said.

Student Publications Multi Platform News Adviser Carrie Pratt said, “WKU and the School of Media’s Photojournalism program have just begun to see what Zane has to offer. I know that in the short period we here at Student Publications have gotten to know Zane we’ve seen huge growth and great potential.”

Meyer-Thornton considers Unforeseen: How COVID-19 has impacted Bowling Green published on May 24, 2020, as his most notable work since attending the University. This WKU Herald visual story tells of people affected by the pandemic. It told the visual story of a grandfather and son adapting to online learning and a mom who learned online at night because her children needed schooling during the day. He also included the story of local essential workers.

“I wanted to document, as much as I could, the changes to Bowling Green when COVID first started,” Meyer-Thornton said.

In addition to his editing role at the WKU Herald, Meyer-Thornton currently serves as an artist-in-residency at Boyd’s Station in Boyd, Kentucky. “I want to use my sociology minor to complement my photojournalism,” Meyer-Thornton said. “I want my photo projects, that I work on, to be based around sociology.”

His position at Boyd’s Station combines Meyer-Thornton’s academic studies by giving him an opportunity to document the area visually as well as write about his experiences and the experiences of those around him there.

Meyer-Thornton added, “The professors at Western, that I have been in contact with, in the photojournalism department and a writing professor in specific named for Andrea Billips (a former School of Media Professional-in-Residence), they have all been such a huge help in taking my work to a higher level. I think they are a really big reason why I was able to get the residency program and the scholarship.”

To be eligible to receive the Facebook Journalism Project and NAJA Scholarship, applicants must be enrolled juniors, seniors, or graduate students at an accredited university in the United States pursuing a degree in digital media/journalism/communications with a commitment to storytelling as demonstrated by completed coursework, clips/work samples and a letter of recommendation from professor or internship supervisor familiar with their work and attesting to career commitment.

For more information on the WKU Photojournalism program, visit www.wku.edu/schoolofmedia. To learn more about the WKU Herald, visit wkuherald.com.