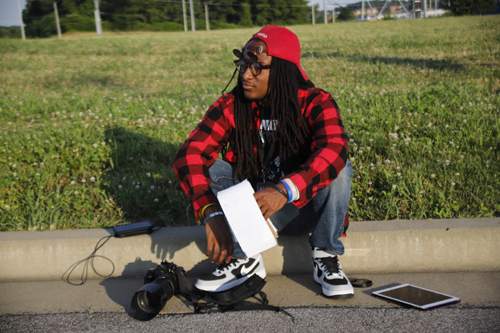 Today, Keilen Frazier, a WKU photojournalism and public relations major from Louisville, finishes his first summer internship as a staff photographer at the Owensboro Messenger-Inquirer.

“This internship has given me the opportunity to be in the field as a professional and have hands-on experience with a different community,” Frazier said.

The Owensboro Messenger-Inquirer chose Frazier through an application process with the College Heights Herald and their available summer fellowships. He works with sports, events, and feature news stories.

“I have learned how to find quality feature stories and give them depth to illustrate the life of my subject, especially when I don’t have any preconceived knowledge of them and have to form a story accurately,” Frazier said. He explained that he tries to capture different perspectives with every feature. “I want to show the many walks of life along the path of humanity.”

Owensboro Messenger-Inquirer Photo Editor Alan Warren discussed Frazier’s importance to their work during the COVID-19 pandemic, “We are a small staff here, and he had to hit the ground running and has learned a lot at a fast pace. Keilen has helped serve the community by helping with our local coverage of several of the social issues that have been going this summer.”

“There are many branches of photojournalism and this internship has aligned toward the journalism side of my degree and shown me what a life in newspaper would be like if that is the direction that I decide to take my career going forward,” Frazier said.

“My dad bought me my first camera,” Frazier said. “I shot a game while I was playing football on the sidelines. I would grab my camera, go off to the side, and be shooting it. Coach didn’t like that very much.”

The game time switch from football player to journalist symbolizes his favorite superheroes Spiderman followed by Superman; Frazier wants to make an impact as well as tell stories. He believed WKU would provide an opportunity to do that.

“I was a big fish in a small pond at my high school. I needed something to get me over the edge, push me to be better and learn from, and really adapt and get to that next level.”

To reach the next level, Frazier looked toward WKU. Frazier participated in the WKU School of Media’s Xposure Journalism Workshop in the summer of 2017.

“It gave me insight into one of the greatest journalism programs in the nation and almost in the world. It really gave me a huge opportunity to do what I like doing and at one of the best places to do it. It [WKU] had the resources and the teachers and also the right type of competition to push me to be better,” Frazier said.

At the Xposure Workshop, he received a scholarship to WKU where he started at the College Heights Herald before the start of classes in 2019. In his first year, Frazier has covered many events including the First Responders Bowl game.

In addition to working at the Herald, Frazier serves as the sophomore representative and social media coordinator for the Habitat for Humanity WKU campus chapter. He begins as an ISEC Navigator this fall while also being an ISEC Scholar. Plus, he is a member of NPPA and PRSSA.

To learn more about the WKU School of Media, visit https://www.wku.edu/schoolofmedia/.