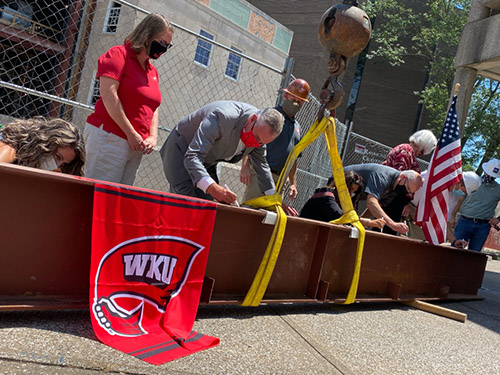 “Generations of Hilltoppers have passed through the doors at Helm Library, and it is exciting to watch this historic building transform yet again to serve future generations of WKU students,” said President Caboni. “Once complete, the WKU Commons at Helm Library will be a lively hub for studying, socializing and collaborating. Placing this beam today is a tangible step forward in our promise to invest in modern, innovative facilities for students and faculty.”

Construction for WKU Commons at Helm Library began in January 2020 and continues with little impact from COVID-19. Much of the first six months were spent on demolition work, which peeled back multiple layers of the 86-year-old building including removing the west wall. The three-story renovation project, by Luckett & Farley of Louisville with Chicago-based Gensler, keeps the best aspects of the former Helm Library’s character while creating a more modern multi-purpose space.

“Helm Library’s original architecture and history are valuable parts of WKU’s story, which we felt was crucial to incorporate into our design. Our research into the building’s history helped guide our approach,” said Luckett & Farley President and CEO Aric Andrew. “We discovered the building’s hidden features, which helped us edit outdated elements of the current structure. The final Commons honors the library’s classic elements while creating a dynamic, flexible and inviting modern collegiate facility.”

Originally built in 1934 as a campus basketball arena and retrofitted in the 1960s to be a library facility, the renovated 85,000-square-foot hybrid structure will be completed before the Fall 2021 semester begins.

“The path of the learner has evolved from consumer of knowledge to active participant. The future of the library must respond to this shift, moving from static purveyor of information to active academic hub where knowledge is created,” said David Broz, Principal at Gensler. “The Commons at Helm represents this future, a space that engages and connects students and faculty through a blend of individual and social learning spaces, complemented with academic support programs. Food provides the fuel, while the adaptive reuse of a former gymnasium provides spectacle and inspiration to fully realize the library’s purpose as a window to the world for the students and the community alike.”

The LEED Silver project recycled nearly 2,000 tons of waste materials in its first phase of demolition diverting 89 percent of removed scrap, books and concrete from landfills. More than 43,000 worker-hours have gone into demolition and renovation work so far. A&K Construction of Paducah is the general contractor for the project, which was made possible through a public-private partnership with Aramark food services.

About Gensler: Gensler is a global architecture, design, and planning firm with 50 locations networked across Asia, Europe, Australia, the Middle East, and the Americas. Founded in 1965, the firm serves more than 3,500 active clients in virtually every industry and has been named the #1 University Architect for the past several years. Gensler designers strive to make the places people live, work, and play more inspiring, more resilient, and more impactful.

Lost River Sessions will showcase The Insubordinate Hillbillies at “Party Under the Pavilion” Thursday (Aug. 25) at SoKY Marketplace in downtown Bowling Green.