Minton Award recipient grateful to mentor, others at WKU 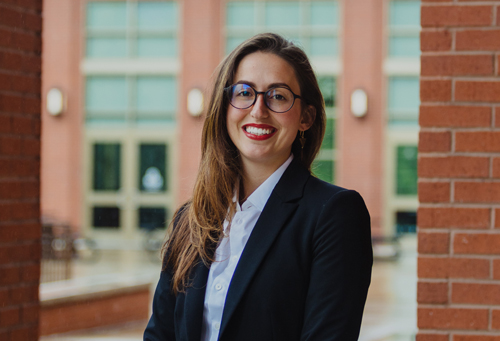 Ava K. Fergerson of Bowling Green is wrapping up her WKU career at the top as the recipient of the 2019-2020 John D. Minton Graduate Student Award.

Fergerson, the daughter of Linda Brown and Trent Fergerson, received her bachelor’s degree in Psychological Sciences with a minor in Gender and Women’s Studies from WKU in May 2018 and has spent the past four years working with Dr. Brausch in the Risk Behaviors & Suicide Prevention Lab.

“It really is validating and encouraging to see my work recognized,” she said.

Her interest in improving the lives of sexual assault survivors began when she learned about Hope Harbor as part of the Gender and Women’s Studies minor. “I was really motivated by Gender and Women’s Studies educators to get involved in service as a way to benefit the community,” said Fergerson, who has been a volunteer advocate at Hope Harbor since 2016. “I realized I enjoyed supporting people in crisis.”

In Dr. Brausch’s lab, Fergerson began pursuing research that integrated her interest in sexual assault with the topic of suicidal thoughts and behaviors in young adults. “I came to love research.”

As an undergraduate in the Mahurin Honors College, she completed and published her thesis titled The Mediating Role of Resilience in Sexual Trauma and Disordered Eating Behavior.

In the master’s program, she continued the study of college students with a history of suicidal thoughts and behaviors. Fergerson received an American Psychological Foundation Graduate Research Scholarship in 2019 to support her Master’s thesis research project titled Applying the Interpersonal Psychological Theory of Suicide to Sexual Victimization.

In 2019, she received the Catherine Coogan-Ward Feminist Action Award from the WKU Gender and Women's Studies program. “The Feminist Action award was an especially great honor because this award typically goes to faculty and staff who have demonstrated outstanding contributions to the empowerment of women,” she said, “and I received this honor as a graduate student for my research and advocacy in women's issues.”

In addition to the Minton Award, Fergerson was selected as the Outstanding Graduate Student in the Department of Psychological Sciences.

Next up for Fergerson is the clinical psychology doctoral program at the University of Southern Mississippi. But the third-generation Hilltopper won’t forget WKU or those who have supported her.

“WKU is such a special place to me. WKU is a tradition in my family,” she said, adding that her grandfather, father and brother are all WKU graduates and her mother taught at WKU for 30 years. “WKU is always going to have a special place in my heart.”

Fergerson noted that the Gender and Women’s Studies program “has been a major influence on my development as a scholar and a person.”

“My biggest thank you goes to the Department of Psychological Sciences and Dr. Brausch,” Fergerson said. “Dr. Brausch is the best mentor anyone could have. I feel fortunate to have worked for her for four years. I’m really proud to be her mentee.”