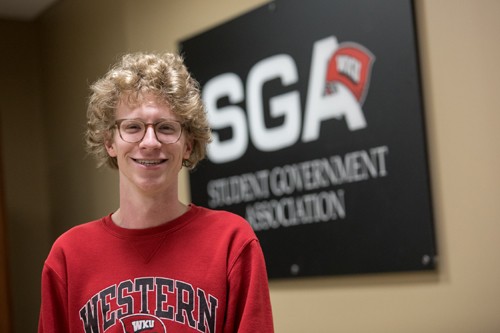 When applying for colleges four years ago, WKU senior Conner Hounshell from La Grange sought unique opportunities to learn paired with a personal education. After touring campus and meeting with the staff of the Mahurin Honors College, he discovered his perfect fit at WKU.

"I knew that if I went to WKU I would not be just a number, and that I would be able to engage in a large variety of opportunities that undergrads at other universities often cannot, such as working directly with a faculty member in research," Hounshell said.

Over the last four years, he collaborated with a faculty member on a research project. He also studied abroad in Kenya, served in the Student Government Association and defended a capstone thesis. Taking advantage of those opportunities, he has crafted a career that he is passionate about pursuing.

Initially declaring as a biology major, Hounshell decided to pursue a second major in political science after talking with Dr. Craig Cobane, Executive Director of the Mahurin Honors College.

"I remember in my Honors College meeting during my tour, Dr. Cobane talked to me about not only taking courses for my future, but also to feed my passion and soul," Hounshell said.

His experiences relating to both majors have frequently intertwined, combining efforts to benefit underrepresented communities and address health issues.

"I have really loved this combination because it allows me to be more well-rounded and has led me to my now passion for public health and health policy," Hounshell said.

Opportunities for applied learning and research were a critical part of Hounshell's WKU experience. He joined the lab of Dr. Nancy Rice, an Associate Professor in the Department of Biology, in the fall of 2017.  While there, he studied a potential link between hypertension and household air pollution in a rural Kenyan population. He developed a survey regarding the indoor burning of raw fuels and household air pollution – a suspected cause of high blood pressure.

Additionally, he traveled to Kasigau, Kenya, as part of the Partners in Caring: Medicine in Kenya program. While there, he collected information for his survey, learned about the local community and gained insight into global healthcare issues in real-time.

After his time in Kenya, he revised the survey for use on future program trips and helped to make it more user-friendly. As he noted, "[our team] realized that the survey was too long to have the participants complete in a reasonable amount of time and in a way that was not confusing." As part of this project, he helped provide a basis for future research to benefit the health of the community. Reflecting on his time with this project and working in Rice's lab, he remarked that working directly with a faculty member was a highlight of his WKU experience.

This practical experience also ties into Hounshell's capstone thesis for the Mahurin Honors College. This unique opportunity allows undergraduate honors students to work closely on a research project or creative endeavor as an independent study. He developed a thesis on the implications of his research in Kenya, as well as the broader global health community, in efforts to alleviate the health impacts of air pollution exposure like hypertension and cardiovascular disease. He also connected his research back to studies that observe similar situations for impoverished populations in America, specifically in Eastern Kentucky and Appalachia.

Hounshell said that in some rural communities there are similar uses of raw fuel types and poor ventilation practices that could lead to similar household air pollution.

In his thesis, he sought to establish the need for future research on this topic and hopes to benefit local communities who are dealing with issues of household air pollution and increased rates of hypertension. This process also helped him develop skills for his future work in public health, such as using research to suggest health interventions.

"Being able to lay a very little piece of the foundation for efforts to improve the health of the global community felt really amazing," Hounshell said.

Paired with his research experience, Hounshell also gained practical experience with political science during his time on the Student Government Association. During his first semester at WKU, he was elected as a senator-at-large. This position allowed him to build on his prior experience in mock government programs.

Hounshell remarked, "I really loved being able to work on initiatives to make WKU work for all students."

Building upon his freshman year, Hounshell served as Chief of Staff for the SGA President in his sophomore year and served as a senator during his junior and senior years. He has written and helped pass legislation to promote a variety of diversity initiatives. He advocated for increasing the number of representative positions in SGA for minority and non-traditional students and encouraged the integration of an LGBTQ+ health curriculum in the school nursing program. He also secured funding for the inaugural Bowling Green Pride Festival and the Lavender Recognition Ceremony, an event recognizing the achievements of LGBTQ graduates on WKU's campus.

Whether in Kenya or Kentucky, Hounshell hopes to use his dual major in Biology and Political Science to fuse his hands-on medical knowledge with an inclusive and community-focused approach in his career path. As he finishes his undergraduate career, Hounshell looks forward to joining the George Washington School of Public Health in Washington, D.C.