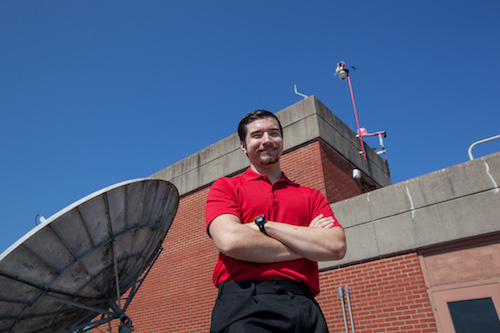 Dallas McKinney has certainly taken advantage of his opportunities at WKU.

He has majored in Meteorology and Geographic Information Science and has been a student in the Mahurin Honors College; has earned a prestigious national scholarship, interned with federal agencies and conducted research projects; and has served on the Student Government Association and as a tutor for WKU TRiO Student Support Services.

Now, the first-generation college student from Mayfield is being recognized as the spring 2020 Ogden Foundation Scholar. WKU’s top undergraduate academic award is presented to one graduating baccalaureate degree senior who has demonstrated exceptional academic achievement and outstanding university and civic engagement.

“It was definitely a great honor to win this award,” said McKinney, the son of Tim and Tonja McKinney.

Like other WKU students, McKinney has completed the semester at home due to the COVID-19 pandemic. “It’s just been very different but it has been for everyone,” he said

While WKU will confer degrees in a virtual ceremony on May 15, McKinney is looking forward to a commencement ceremony later this year.

“I’m really happy for my time here at WKU,” he said. “I’m very grateful for being honored with this award and I hope to carry the Hilltopper Spirit the rest of my life.”

McKinney has always been interested in weather, but his interest in GIS began at WKU.

“I’ve always had a great passion for weather. I think my parents picked that up early. I started wanting to watch the Weather Channel instead of wanting to watch cartoons. When I was really young I remember Hurricane Katrina hitting and watching the coverage,” he said.

“Then as I got through high school I realized I was really good at math and science so I wanted to find some profession that I could use my aptitude and skills in math and science. When I got to WKU I started taking geographic information systems classes on how to make maps using the computer. I realized I was really good at that and had a passion for that too. So it was natural to pick it up as a double major.”

His numerous academic recognitions include receiving the Outstanding Senior in Geographic Information Systems Award this spring.

In addition to his academics and research, McKinney is proud of his service on WKU’s Student Government Association. He authored several bills, including one for a first-generation student scholarship. “I thought it was really important to help other first-generation college students to be able to excel,” he said. “Money is a big problem a lot of times for college. You end up working jobs instead of having time to study. You have to balance that out so I thought a scholarship could help. Thankfully the other SGA members saw my vision too and jumped behind it.”

McKinney said the opportunities provided by WKU have prepared him for the University of Utah’s atmospheric science graduate program as well as his plans to work for the National Weather Service. “I’m hoping to have a career where I’m able to serve people and use my skills to serve people,” he said.

“My internships while at WKU prepared me for my future career,” he said. “I’m very grateful to have had the opportunity to go through here. I’m sad it’s over.”