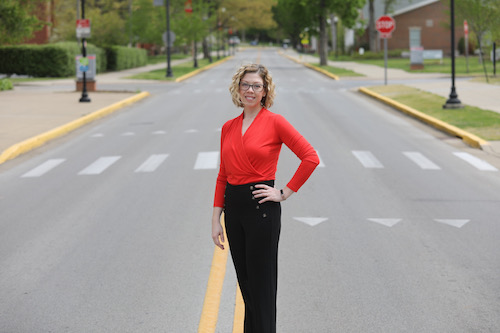 Dr. Katrina Burch, assistant professor of Industrial/Organizational Psychology in WKU’s Department of Psychological Sciences, shared her research on work and commuting on the Department 12 Podcast.

In the interview with Dr. Ben Butina, she discussed the following questions: Is commuting a transition or a life domain in its own right? How does work spill over into the commute? Why is it so hard to get good commuting data? What about people who really enjoy their long commutes? What’s wrong with them? Or, what’s right with them? How are people going to feel about commuting after working from home due to the COVID-19 pandemic? Listen to the podcast at https://department12.com/katrina-burch-on-commuting/

Dr. Burch became interested in the work-life balance of long commutes when she lived in southern Washington and commuted to her job near Portland, Oregon. The 25-mile trip took an hour and a half in the mornings and two hours in the evenings. She has been conducting research on the intersection of work and commuting for approximately six years. Additionally, prior to working at WKU, she spent a year working as an engineering psychologist with the U.S. Department of Transportation, working on safety and transportation.

Although research has shown that work can spillover into the home and other nonwork domains, little attention has been paid to the impact that work may have on the transition (daily commute) between one’s work and nonwork (home) domains. “Using daily diary methodology, my research focuses on the cognitive and emotional pathways through which work attitudes and experiences influence behaviors during the commute,” she said.

Negative experiences at work and at home can impact the commute, Dr. Burch said.

“Key findings from my research suggest ruminating about work during the commute may impact one’s attention during their commute, significantly impacting commuting safety behaviors,” she said. “Additionally, I have explored the emotional pathways that influence one’s aggressive driving behaviors, finding that experiencing daily job stress and incivility at work influences the negative emotions one brings into their commute, which is significantly associated with aggressive driving behaviors.”

She’s also interested if people who are working from home during the COVID-19 pandemic will look at their daily commute differently once they can return to the traditional workplace.

For more about WKU’s Department of Psychological Sciences, visit https://www.wku.edu/psychological-sciences