Hamilton focuses on ability, not barriers 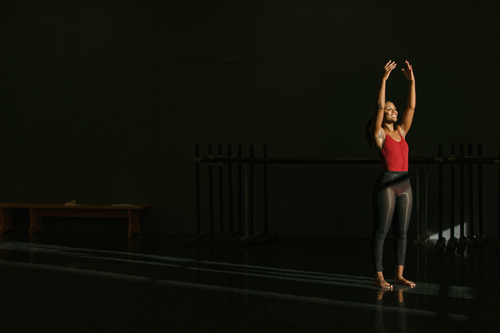 Dance well. Sing loud. Speak boldly. Graduate with honors. Jazzlin Hamilton’s doctors did not expect her to perform those actions, but she did and still does. This is a story of a WKU junior from Louisville who defies odds.

At the age of 8, Hamilton experienced a traumatic brain injury (TBI) in a case so rare that doctors did not expect her to make it. If she did make it, they expected challenges.

“The doctor told my family that there was no guarantee that I would ever walk and talk again,” Hamilton said.

According to the Center for Disease Control, “The effects of TBI can include impairments related to thinking or memory, movement, sensation (vision or hearing), or emotional functioning.”

Hamilton explained that her limitations included dance and outdoor play. When she did engage in children’s activities, it required her wearing a protective helmet wherever she went.

“That really changed my life because I was this outgoing kid, ready to dance, ready to take the world by storm, and I had to sit four years of my life out. That really made me grow up as a child faster than most because I just had to watch as the world went by. And, I really did not understand why that happened to me. I really didn’t understand my purpose,” Hamilton said.

Hamilton switched schools in elementary school, changing to a school where none of her peers knew of her disability. When she scored well enough to meet the qualifications for advanced classes, she knew how smart she was. This led to continued achievement in academics and extracurricular activities, including becoming captain of the dance team and valedictorian of her senior class.

“That kind of made me realize that my purpose was to show that we (individuals with disabilities) could really do it, and tell my story,” Hamilton expressed.

Hamilton entered WKU as part of the first cohort admitted into what is now known as the Cynthia & George Nichols III ISEC Academy Scholars.

“ISEC (Intercultural Student Engagement Center) was like a home for me. It was like a starting place,” Hamilton said. She said she wanted to get involved from the beginning of her time at WKU, and this included participating in the ISEC Academy and WKU TRIO’s Student Support Services.

Executive Director Dr. Martha Sales explained, “Student Support Services is a TRIO program designed to assist first generation and Pell eligible students with matriculation and success in postsecondary education.” Sales, who serves in the position of Executive Director for TRIO Programs and the Intercultural Student Engagement Center (ISEC), added, “ISEC is simply a TRIO program for students of color at WKU. Both programs are designed to provide college success and assistance with eliminating barriers presented to first generation and students of color.  In addition, both programs assist participants with increasing a sense of belonging.”

“One of the resources that they provided for me, that really helped me, was a tutor because I was so nervous about school - about math,” Hamilton said. WKU senior Dallas McKinney became Hamilton’s tutor during her first year. “For three years, I have developed this relationship with a tutor that has helped me academically and has seen my growth. Although (my understanding) of the material is still there. I want him to drill me on it. That is how my memory works.”

Hamilton was determined to succeed in college. According to Sales, Hamilton was among the first students recruited for the Academy. “TOP scholars are students with GPA’s 3.2 or better each semester. Jazzlin received a 4.0 during her first semester and continues to be honored as one of ISEC’s TOP scholars,” Sales said.

Hamilton’s college experience includes majoring in broadcasting with a minor in musical theatre. Hamilton explained that she has an audio deficiency as part of her TBI. “I have to see it and read it. I need time,”Hamilton said. Her academic pursuits show her overcoming the areas of her youth in which the TBI limited her.

“Jazzlin possesses a true growth mindset as she believes she can overcome every obstacle that stands in her way. I’ve never heard her use the word ‘can’t.’ Instead, she puts in the time. She does the work each and every day,” said WKU Assistant Professor of Musical Theatre Voice Dr. Amelia Rollings Bigler.

Hamilton said her father has encouraged her to have a strong work ethic.

Hamilton explained, “My father instilled in me that hard work beats talent when talent doesn’t work hard enough. I truly believe as I too was the one lacking in physical movement, memory or being able to function normally. Yes, I may be talented, but I have to work twice as hard as the next person given my circumstances, and that is called hard work.”

“At the beginning of the semester, she selected a song that she knew would stretch her as she could not sing it efficiently. She performed the song yesterday for our class, and not only was it successful, the entire class erupted in applause because they had seen how far she had come vocally. She’s a true inspiration to all of those who know her,” Rollings Bigler said.

WKU Assistant Professor of Dance Meghan McKinley expressed, “Jazzlin is a vibrant and eager student. A sense of community is important in this course, her enthusiasm and humor balanced with hard work help bring her peers at ease. She has been a pleasure to work with and to continue to watch grow in both her physical and philosophical understanding of movement.”

Hamilton’s teachers in high school did not know her story, and any WKU instructors aware of her TBI, learned about it from news articles in 2019.

“My first time telling people (about my TBI) was in college,” Hamilton said.

When Hamilton earned the title Miss Black Western 2018 followed by Miss Western Kentucky 2019, it created a platform for her to share her story and begin a journey of speaking up for others with traumatic brain injury.

“I am the voice for the unspoken for. I am fueled with passion to make a difference for others,” Hamilton said.

Achieving her goals while living with a traumatic brain injury, Hamilton strives “to be a voice for students with disabilities.” She currently serves as president of MAPS, which stands for Mastering Accessible Possibilities for Students, and works to change the way people think about disability.

“While speaking with me about MAPS, her (Hamilton) tone of voice acknowledged her passion and dedication towards its mission,” said MAP Advisor Claire Parsons.

Parson explained that when it comes to spreading disability awareness, Hamilton comes up with many obscure ideas, including The Ability Pageant.

“Prior to the pandemic, she thought of the idea of putting together a pageant with the purpose of breaking stigmas in relation to individuals with disabilities. With this idea, she became very objective with ideas that members had for this project. While being objective, she theorized how the pageant could come about while making sure that every member was taken into consideration,” Parsons said.

In January 2020, Hamilton went to Costa Rica hoping to take what she learned back to her hometown of Louisville for a future project. Hamilton received the Benjamin A. Gilman International Scholarship for study abroad in 2019. She studied geography, specifically sustainability in the tropics, to learn about the environment.

“For my Gilman project, I am taking what I learned in Costa Rica and implementing it into the West End of Louisville.” She explained the nearest food option in some areas is a McDonalds or Taco Bell. “Where are our gardens?” Hamilton asked.

Hamilton wants to partner with organizations to help community members have gardens to grow their own food. The project would be done in partnership with the Kentucky Proud Association, a sponsor of the Miss America Organization.

While the pandemic put some of Hamilton’s work on hold, she continues to press forward. Hamilton plans to continue to speak for those with disabilities and look for ways to give back to her community. This includes using her pageant platforms and participating in Miss Kentucky.

“When you focus and you work really hard, you get opportunities because you worked so hard. It is all a ripple effect. [I thank] all these influential people who have helped me along the way because I could not have done it myself,” Hamilton finished.

The WKU Graduate School will host its inaugural 3MT® competition in February.