Rollings Bigler gives students a voice through teaching and research 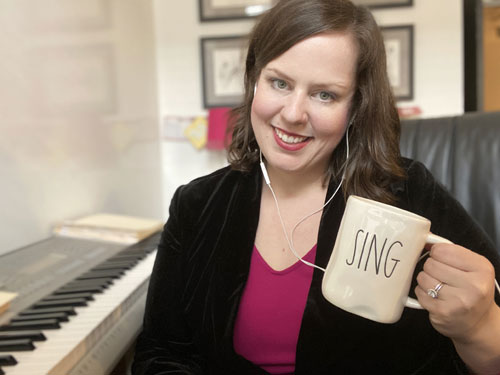 Dr. Amelia Rollings Bigler, Assistant Professor of Musical Theatre Voice, helps her students find their voices through her commitment to empower students by teaching them how to sing.

“A student from my first year teaching at WKU just recently wrote me and said that I had given her a voice, both literally and figuratively,” Rollings Bigler said, “My mission is to inspire and serve, by teaching the world to sing, one voice at a time.”

“This semester, I am teaching applied voice lessons, Musical Theatre Voice Pedagogy, and MT Workshop 1, which combines singing, acting, and movement through musical theatre songs and prepares the students to audition and perform in musical theatre,” Rollings Bigler said. She explained that she begins each class with twenty minutes of group voice work, and then a master class format, where each student presents a song for instructor and peer feedback.

With the change to teaching and learning online, Rollings Bigler had to make many adjustments to continue to work with students.  She continues to meet with her applied voice lesson students at their regularly scheduled lesson times through Zoom. For Musical Theatre Workshop, they meet one time per week for group voice work on Mondays.

“During the time we would typically meet on Wednesdays, students work during class time on their own and send me a “Marco Polo” of them performing their song with an accompaniment track,” Rollings Bigler said. “This app allows me to respond back to them with specific feedback, and we exchange videos back and forth until the next class when they will perform it in person for their classmates. Having this app also helps students with a slower internet speed, as they can record using their phones.”

Even in the midst of a pandemic, Rollings Bigler sees the impact of her teaching on the lives of others every day.  She explained, “I have students who came to me unable to sing, match pitch, or even having injured their voices. They leave my studio able to perform professionally around the world and impact the lives of others due to the technical and musical skills I have helped them develop. They are able to thrive under very hard circumstances both in life and on the stage. Not only can they sing, they are stronger and more resilient human beings who have something to say. I’m proud of every one of them.”

In addition to her position at WKU and her research and service agendas, Rollings Bigler teaches 10-15 students per week working professionally in opera, musical theatre, and commercial music through her virtual studio. While many may be new to online teaching, she began teaching online voice lessons almost 10 years ago.  “Teaching my professional clients online allows me to work with singers currently in the industry. They report back to me industry trends, which has been incredibly useful as I am able to pass on this information to my students here at WKU as they work to transition into professional performance jobs,” Rollings Bigler said.

Rollings Bigler started college as a piano music education major, but working on her own voice through required voice lessons confirmed her academic pursuit, and she decided to add another major in vocal performance. “I had a weak and breathy voice and could barely match pitch at the time, but I was fortunate to have two transformative teachers early in my training who built my voice from the ground up. From that point on, I loved singing and eventually came to also love teaching and passing on the gift that I was given.”

Through Rollings Bigler’s Ph.D. study, she became interested in research in voice pedagogy. Her research interests include group voice teaching, historical voice teacher education and certification, and the relationship between head position and jaw opening with singers. She recently published a study on the effect of high-heeled shoes on female singers in the world’s premiere peer-reviewed voice medicine and research journal, Journal of Voice. Rollings Bigler was also recently selected to serve as the Editor-In-Chief of the Musical Theatre Educators’ Alliance journal.

Rollings Bigler received the Van L. Lawrence Fellowship in 2018 awarded by the National Association of Teachers of Singing and The Voice Foundation. This award, one of the most prestigious awards in the field, recognizes one singing teacher each year engaged in empirical voice research.

For more information on musical theatre and the WKU Department of Theatre and Dance, contact https://www.wku.edu/theatre-and-dance/.

The WKU Graduate School will host its inaugural 3MT® competition in February.