McElroy achieves victory off the field 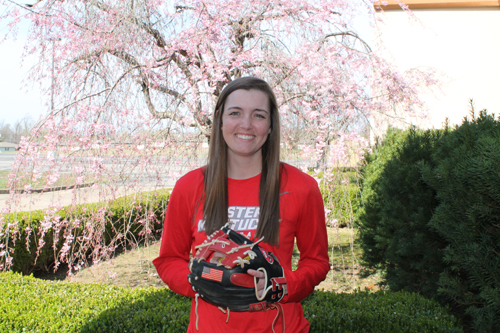 Morgan McElroy’s character shows clear in how she approaches her academics, career pursuits, leadership in softball, and in being a friend to those on her team.

McElroy started earning academic honors her first semester at WKU after being placed on the WKU President’s List for earning between a 3.8 - 4.0 GPA. From fall 2016 through fall 2019, she continued earning her way on the President’s list. Excelling academically does not mean McElroy has not seen any failures though. She explains that softball taught her how to make adjustments off the field as well.

“If you make an error on the field, you have to wipe it. You have to adjust, make an adjustment really quickly, and you have to not do it again,” McElroy said.  So, if you do bad on a test in school, then you have to study for it. Then you prepare well for it, and then you don’t fail again.”

This spring semester, McElroy finishes her classes to complete a Bachelor of Science in Accounting. At the same time, she is completing another semester in the Accounting Department’s JUMP Program, which allows her to simultaneously work on her master’s degree. This means after earning her bachelor’s degree in May, McElroy will wrap up her graduate studies in the fall to receive her second WKU degree in December.

“I want to work for a Big Four firm,” McElroy expressed. The path to reach her ultimate goal, to be a CPA at one of the four largest accounting firms in the industry, will begin this summer at Ernst & Young.

McElroy’s internship at Ernst & Young provides a great opportunity to gain experience with business accounting, such as performing audits. And, while some may not see performing audits as an ideal summer experience, McElroy truly enjoys that type of work.

“I am more of a numbers person. Really it clicked with me and it just makes sense,” McElroy explained about her decision to pursue accounting. She started WKU undecided. After taking an accounting class, she decided to pursue the degree.

“They just make you learn the material very well. We have to do a lot of outside research, which I think helps because you will have to do that a lot in your career. So, learning how to do the research and prepare for a client will be really beneficial,” McElroy explained.

McElroy’s hard work extends to the softball field as well.

“Last year was our best season in program history,” McElroy said. “It was good to be a part of.” The WKU Softball team achieved its best win percentage in program history during the 2019 season with a record of 37-13 (0.740) until reports confirm that with the 2020 season now complete, the teams 20-5 (0.800) ending sets a new record.

As a middle infielder, McElroy must be a leader, always talking to everyone to make sure they know what is happening.

“I feel like I am more of a leader by example than a vocal leader. So I feel like just leading by example, other people will follow you,” McElroy said. “No matter if your actions speak louder than your words, what you do is more important than what you say.

“I know I can count on anyone on my team for anything,” McElroy expressed. She explained, “I feel like those relationships will continue outside of college.”