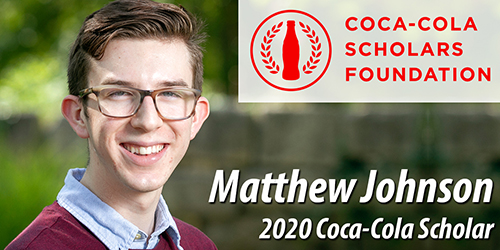 Matthew Johnson, a senior of the The Gatton Academy of Mathematics and Science and Oldham County High School, has been named a 2020 Coca-Cola Scholar.  Johnson is the son of Bridget and Mark Johnson from Smithfield.

Johnson was one of 150 students selected from across the nation, and one of just six in the Commonwealth of Kentucky, to earn the recognition.  A total of 93,075 seniors applied from across the county this year.

“Being named a Coca-Cola Scholar is the highlight of my senior year,” states Johnson.  “To be recognized alongside 149 other scholars from across the nation by one of the most prestigious corporations in the world is an honor.  I look forward to meeting each of the other scholars soon and to assisting in leading positive change in the world.”

According to the Coca-Cola Scholars Foundation website, a Coca-Cola Scholar not only exemplifies superior leadership, service, and academics - they are change agents, positively affecting others in their community.

“Having worked with Matthew for almost two years, I can honestly say there is no one more deserving of this recognition,” stated Cheryl Kirby-Stokes, Academic Opportunities Coordinator with The Gatton Academy. “His research working with pregnant women and his desire to enhance the well-being of mother and fetus make him the perfect recipient for this award. I cannot think of another student more forward-thinking about his career as an OB/GYN and how it can positively impact his community.”

Johnson will receive a $20,000 college scholarship and join a network of more than 6,300 alumni who are leading positive change in their communities and around the world.

“We believe that identifying these young leaders throughout the country and encouraging their passion for serving others not only empowers the students, but also lifts up those around them.” said Jane Hale Hopkins, President of the Foundation. “The Coca-Cola system is dedicated to giving back to the communities they serve, and the Coca-Cola Scholars Foundation is proud to be a part of that commitment.”

In addition to receiving college scholarships, the new class of Coca-Cola Scholars have been welcomed into a vibrant and growing family of alumni that have become a powerful force for positive change in the world. Through networking, collaborations, and friendships, the group strives to make a greater impact together. Recent events and initiatives include the 2018 Coca-Cola Scholars Leadership Summit, a post-hurricane clean-up in Houston, and the fourth year of a coaching program that partners seasoned alumni with first-year Scholars as they transition to college.

The Kentucky Council on Postsecondary Education recently convened experts from colleges and universities across the state who will work to ensure public higher education curricula includes essential skills.