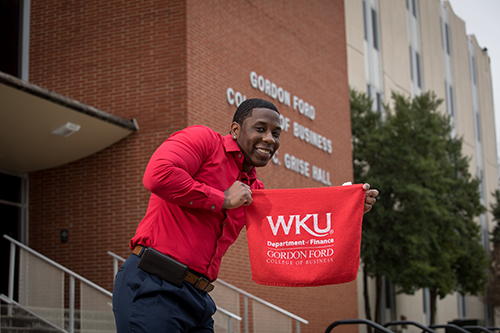 It may have taken longer than a decade, but Brandon Johnson is finally completing his second year at WKU.

Johnson first came to WKU in the fall of 2007 from his hometown of Memphis, Tennessee. The first from his family to attend college, he was ready for the university experience and excited to see where his education would take him. However, during his sixth week on campus, he was hit by a drunk driver and injured so severely that it derailed his academic career. He returned to his hometown, undergoing six surgeries over the next year to regain the ability to walk.

“It was tough,” Johnson said. “Physically, economically, and mentally. At times, I didn’t know if I could do it.”

During his long recovery, he worked in the hospitality industry, gaining expertise in various aspects of that industry such as organization and customer service. Johnson said his coworkers encouraged him to pursue his education once more. Finally, in 2017, he restarted his academic career at Southwest Tennessee Community College, where he found he had a knack for accounting, finishing with a 3.75 GPA.

After earning his Associate’s Degree, he made the decision to try WKU again. So, in the fall of 2019, Johnson was back in Bowling Green. This time, as a 29-year-old nontraditional student with even bigger goals in mind.

“It changed a lot!” Johnson said about campus over the decade of his absence. “But one thing didn’t change: the professors. They still care so much and want to see me succeed academically as well as socially. I know I made the best decision.”

Johnson hit the ground running as soon as he arrived back on campus, declaring a double major of business administration and finance, moving into the Kentucky Street Apartments, and helping to found a student organization, the Collegiate Entrepreneurs Organization (CEO).

“Brandon is passionate about excellence,” said Dr. Cole Crider, Visiting Assistant Professor of Entrepreneurship. “His passion for excellence is evident in his leadership of WKU’s chapter of CEO. As president of the group, Brandon has generated student engagement, focused CEO’s activities, and mentored younger students.”

This summer, Johnson plans to serve as an Area Manager Intern for Amazon. In this position, he will shadow a manager in one of Amazon’s fulfillment centers and learn valuable leadership skills in one of the fastest-growing companies in the country.

“I’m excited!” Johnson said. “If I do well, there could be an opportunity for a full-time job.”

Amazon told Johnson that he would be placed in an area of high demand – not necessarily in the location closest to him -- and that is perfectly fine with him.

“I want to see the world,” Johnson said. “I am open to anywhere they want me to go.”

Eventually, Johnson wants to earn his MBA but may want to pursue employment for a few years before heading back to school.

“My essential objective is to think outside the box,” Johnson said. “I want to see things for more and what they can be. I want to improve every environment I am placed.”