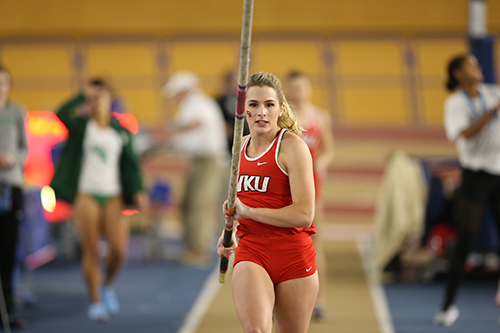 Nikki Ogorek’s pole vaulting career started in her family’s living room when she was about 5 years old.

“I remember I was watching television, and the Olympics were on,” said Ogorek, a junior from Bloomington, Illinois, who studies graphic design and competes on the WKU Track and Field team as a pole vaulter. “I saw the pole vaulters on the screen, and I thought it was the coolest thing.”

Watching athletes on television, the 5-year-old took a broom, turned it upside-down, and used the stick end to vault over the back of the couch. Ogorek said her mother heard the commotion and initially told her to stop, concerned that she would hurt herself.

“My parents have always been great. They’ve never been the ones to really get on you for anything like that,” Ogorek said. “And, that’s how I started vaulting.”

It wasn’t until several years later when she transferred middle schools that she joined a pole vaulting team. The middle school she moved to had a new pole vault program and no participants.

“I thought I would give it a try. A couple of friends and I went out to the mat with the coach. The coach really didn’t know anything about pole vaulting either. We were all just out there with a stick and a mat and we were like - ‘Okay, how are we going to get over this bar?’” Ogorek said.

By that point, Ogorek was already running cross country. Track was a natural next step for her, but once she had the opportunity to get in the air with pole vaulting, she never wanted to leave the runway.

Pole vaulting at the collegiate level is a challenge, according to Ogorek. She said working toward a degree in graphic design is challenging too, but coming to WKU where she said she gets to be a student first makes all the difference.

“I love that graphic design combines something that I love, art, with a great career field,” Ogorek said. “What’s tough about my program is the amount of studio time it takes to get things done. For example, some student-athletes can take three or four classes in the morning and be done with classes for the day. They’ll have practice after class, and then they’ll go home. With studio majors and other lab majors, it’s tough because you can take one class in the morning that lasts three hours and then go to practice. Then, it’s another three-hour class and another practice. It ends up being a lot going on in one day. The biggest thing is time management, planning your schedule out a semester ahead, and planning ahead every week.”

Academic advisors at the WKU Student Athlete Success Center assist Ogorek with planning semesters accordingly so that she can stay on track to graduate.

In addition to her academic program offered through the WKU Department of Art, Ogorek gained valuable experience in her field through an internship with Imagewest, a student-run advertising and public relations agency housed within the WKU Department of Communication. Ogorek interned at Imagewest as a graphic designer last fall and hopes to intern there again next fall.

“Building the groundwork for what you are planning to do after college is so important,” Ogorek said. “I think that opportunity [with Imagewest] has been the biggest thing for me. I’m leaps and bounds ahead of where I thought I’d be.”

Ogorek said the opportunities she’s had at WKU are all possible because WKU student-athletes are students first.

“If you are looking for a school, look for one where you can be a student first. It would be great to go pro, but you need to have another plan. You need to find out who you are outside of being an athlete. If you can find that out, you will feel more fulfillment in your sport,” Ogorek said.

Ogorek has had the opportunity to compete for WKU at both the C-USA Indoor and Outdoor Track and Field Championships since her freshman year. One of her proudest moments with the team was when she broke the freshman record for WKU with a jump of 3.87 meters (12 feet, 8.25 inches). She said that was a big moment for her because she went through a time in high school where she put her head down and worked hard but wasn’t seeing the results. When she came to WKU, she said she started to see those results.

Now as an upperclassman, Ogorek said her athletic career is challenging in a new way because a lot of the team graduated, new freshmen have come in and the coaching staff has changed.

“There have been a lot of changes with the program, but the thing that remains consistent and the thing that will continue to help us as we compete is that we’re all still here to support each other,” Ogorek said.

For more information about WKU Track and Field, visit www.wkusports.com.

About the Student Athlete Success Center: The Carol and Denny Wedge Student Athlete Success Center opened in January of 2009. The SASC is a 10,000 square foot academic complex located in Houchens Industries L.T. Smith Stadium and houses the academic advising staff, a computer laboratory and a large study area designated solely for use by student-athletes. The SASC is also equipped with conference rooms and several private study rooms for WKU student-athletes to meet with athletic tutors on a one-to-one basis or work on class projects.