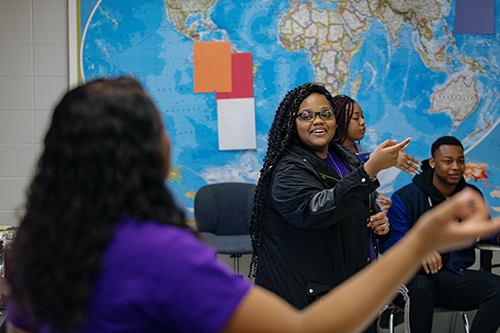 “I always wanted to start a mentoring program, but I didn’t know how it was going to happen,” said Keyonna Whaley, a WKU junior from Louisville studying criminology and organizational leadership and founder of Sister Act Mentoring Program.

Sister Act Mentoring Program formed in the fall of 2019 and currently focuses on mentoring high school students to better prepare them for college. On Mondays, mentors visit Bowling Green High School to present a topic and answer any questions from students in the P.R.O.W.E.S.S. (Providing Real Opportunities Where Everyone Sees Success) Club, led by teacher Kimberly Calhoun. The mentors ask the students what topics they would be interested in learning more about and then bring in speakers for those subject areas.

P.R.O.W.E.S.S. was a good program for Sister Act Mentoring Program to work with because of its objective. “The objective of P.R.O.W.E.S.S. is to equip and empower its members to know and invest in themselves in order to excel socially, professionally, academically, physically, psychologically, and familially,” Calhoun provided. “We focus on exploring current events in the African American community, learn about issues in the past that still plague our community today, and work on college prep ACT material. They have also been learning to invest in themselves and their future.”

"Sister Act extends their service beyond the ladies in my class. They do a great job at bringing in male students of various backgrounds from WKU,” Calhoun said. “All students look forward to seeing them every Monday."

WKU junior Maxwell Brown currently attends the Monday sessions to mentor the young males. Sister Act Mentoring Program plans to provide a separate component in the future for the male students, which is anticipated to be led by Brown.

“I can help you with some stuff, but the new stuff, I cannot help you with,” Whaley explained that her mother told her. Although she had earned a degree, she understood that the application and enrollment process had changed since she attended college. In addition, Whaley felt there was a lack of resources in her high school. “I was not properly prepared for college.” Whaley said. That was her first reason for wanting to start Sister Act Mentoring Program – to better prepare high school students for college.

Whaley also experienced friends being underprepared and not returning to school.

“I would see all my friends dropping out. It was sad to watch and see.”

Whaley, herself experienced a difficult semester after her father passed away.

“I went into a deep dark depression. I stopped going to class. I stopped doing work. It caused me to be on academic probation. I said ‘I am not coming back to WKU’,” Whaley said. “I talked to Dr. Martha Sales (Executive Director for the Intercultural Student Engagement Center and TRIO Programs) and Brandon Green (formerly Student Success Advisor), and they sat me down and said ‘No you have a purpose (here)’.” She shared that they helped her with being more accountable and with managing her time.

Whaley’s ability to recover from a semester of academic probation heightened her belief in college readiness programs for high school students. She believed having a mentoring program in local schools would encourage students to attend WKU, and the mentoring program could help those students become more familiar with campus and therefore, be more successful once enrolled.

“So, the new freshmen (current high school students) will come here (to WKU). They can see us, and we can be mentors to them and guide them in the right direction,” Whaley said.