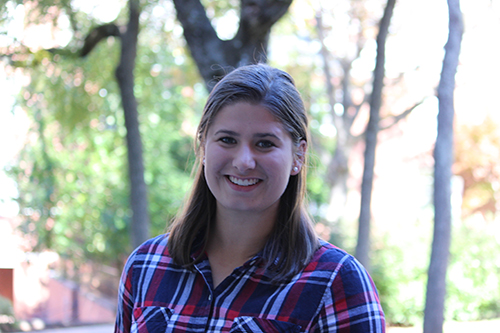 Picture this: During the spring of her sophomore year, McGraw answers an email invitation to attend an information session on campus hosted by the Tennessee Valley Authority (TVA), the largest public utility in the nation, regarding internship opportunities for data analytics students. Because she had just started coursework in her major, McGraw doesn’t think she has much of a shot at earning one of the coveted internship spots, but attends anyway.

“You’re first,” McGraw hears as TVA personnel announce that interviews were taking place immediately following the information session. Shrugging her shoulders -- she considers any interview experience valuable – she moves to another room to chat and complete an assessment.

“Since that day, it’s been a whirlwind,” said McGraw, a senior who studies business data analytics and economics. “Two weeks later, I started as an external contractor for TVA doing data analytics.” Eighteen months later, she says all that she has learned both professionally and personally from her time as a data analytics intern for a program manager at TVA has been a gift.

“The knowledge I gained I think far surpasses what I could have learned in college classes alone,” McGraw said. “Moving from a student atmosphere to a workplace atmosphere and learning how to approach a workplace setting has been a great part about this experience.”

The Louisville native spent time in both Bowling Green and Nashville TVA offices during her tenure and completed several challenging projects.

One of her favorite projects took place over a year’s time as she helped write scripts that analyzed work order budgets versus what was actually spent.

“I had no experience in coding but I was told, ‘See what you can figure out.’ Every day was a challenge like that,” McGraw said.

She said her supervisor Justin Neal provided those challenges but today considers him a great mentor.

“He said, ‘I’m gonna push you as hard as I can,’” McGraw recalled as she discussed a Moleskin journal he presented her with on her first day on the job so she would have a spot to write down information and advice that would positively influence her future.

“It has 44 different pieces of advice in it now and I consider it my Rule Book,” McGraw said. The Rule Book has followed McGraw to now a second data analytics internship – at Abound Credit Union (formerly known as Fort Knox Federal Credit Union).

Again, it was a professor’s email that steered her to the job opening – a little different in scope than the TVA internship but valuable experience nevertheless.

“I might not be the right person for this but I’m going to try,” McGraw said. And she was offered the job at the beginning of the fall 2019 semester and will continue through this semester.

“There’s so much going on,” McGraw said about her current internship. “While 90 percent of this is getting into the nitty gritty pure IT side of things, I’m excited for it because it gives me a chance to take the skills I have learned in a completely different direction.”

McGraw is one of the greatest proponents of getting internship experience while in school.

“It completely changes the way you look at classes,” McGraw said. “You start asking yourself, ‘How can I make sure I know this material well enough to succeed – not just get an A?”

After completing two outstanding internships, befriending a professional mentor, and gaining a wealth of experience she couldn’t get in the classroom, what’s next for McGraw after she graduates in May 2020?

“I’m open to anything,” McGraw said.