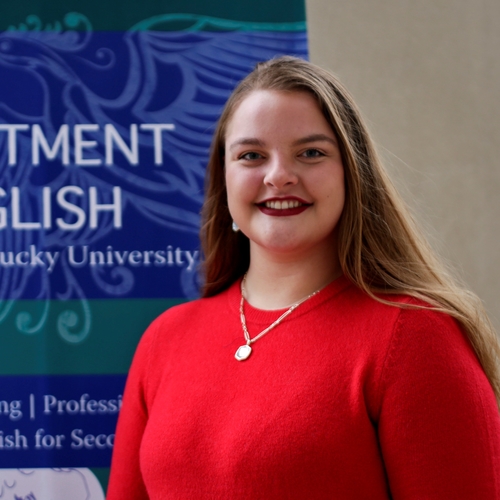 Aubrey Kelley is a senior double major in Professional Writing and Political Science from Somerset, KY. Recently, Aubrey was accepted into Columbia Law School in New York City. Columbia is ranked in the top five law schools in the nation, according to US News.

Aubrey has had the dream of attending law school for a while. She says that this goal was one of the primary reasons why she became an English Major.

“Reading and writing have always been passions of mine,” said Aubrey. “I wanted a major that would allow me to cultivate these passions in a way that would be conducive to my goal of going to law school.”

Along with her study of English, Aubrey also majors in Political Science. She says that she has benefitted from studying both due to their shared focus on people.

“When I became a major, I did not realize how much English centers on the study of humanity,” said Aubrey. “English, along with my second major, Political Science, has given me a complex understanding of the world that I will carry with me for the rest of my life.”

Aubrey concentrates in Professional Writing for her English major. She says that she chose to pursue this aspect of English due to its practicality in the workplace.

“Writing is a crucial part of the professional sphere,” said Aubrey. “I use professional writing every day, from writing emails to professors to writing articles for my job in the Department of Political Science.”

“I used my professional writing skills throughout the entirety of my law school application process,” said Aubrey. “Professional writing helped me to write a persuasive personal statement, develop a strong résumé, and prepare for my interview with Columbia Law School.”

Aubrey also remarked that the English Department is helpful because of its “community of supportive faculty and peers.” She says the faculty helped push her to realize her full potential and that she is grateful for their help.

To those who are considering becoming an English major, Aubrey offered some wisdom from her experience: “My advice to anyone considering or pursuing an English major is to make the most of every class. Many English classes push you outside of your comfort zone, and it is important to realize how valuable this can be, and to use this as an opportunity for growth.”