View from the Hill: Childhood friends from Belize reunite at WKU 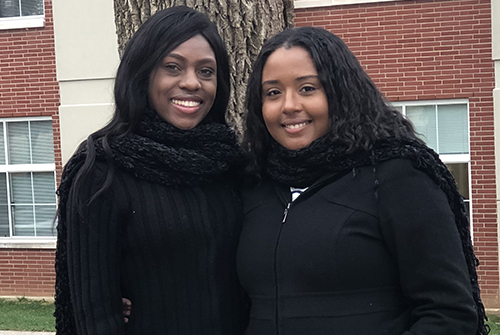 What are the odds that two childhood friends from Belize would bump into each other on WKU’s campus? Not very high but it happened. WKU’s Amy Bingham has their story in this week’s View from the Hill.

This is quite a coincidence.  Belize – population 390,000 --  is located on the eastern coast of Central America. It took coming to WKU for two childhood friends from that country to reunite.

Belizean students Chelsie and Brenesha may be laughing now but it wasn’t that way when they arrived at WKU last fall.

“Around that time it was September and it was like my birthday and I was feeling homesick.”

But a chance encounter changed everything.

“One day I was walking around campus and I felt like someone touching me and I was like who are you? And I was like oh my goodness that’s Brenesha.”

“When I found out it was her that  was the best day of my life we were so happy.”

“That’s Brenesha in the blue shirt.”

The young women lived nearly three hours apart in Belize but would see each other every summer at church camp.

The two lost touch when they aged out of the camp at 16 and never imagined finding each other on the same campus in the U.S.

“I didn’t even know she was coming here.  She didn’t know I was coming.  It was very good to meet her here.”

Now they’re navigating the rigors of college in a foreign country together and helping keep homesickness at bay.

“It’s the simple little things like talking in our dialect creole, it just makes a big difference.”

“Our families are very happy that we found each other and are together.”

Both Chelsie and Brenesha already had their associate degrees when they came to WKU.  Chelsie is pursuing a degree in Public Relations and Brenesha is studying Biophysics.