View from the Hill: Kicker's background prepared him for big moment 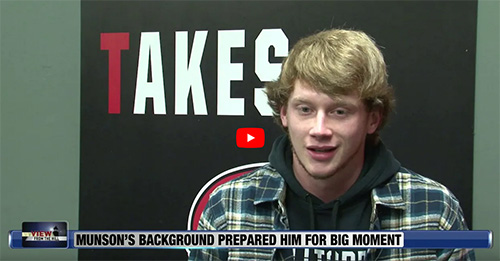 It’s a memory that will last a lifetime for one student-athlete in particular. WKU’s Amy Bingham talks to him in this week’s View from the Hill.

Cory Munson says aside from extra attention on social media, not much has changed since he propelled WKU to victory on Dec. 30. But Munson’s background is full of reasons why he was more than ready for that moment in the spotlight.

In case you’ve forgotten how it all went down, this is the play WKU Football fans and Cory Munson will remember forever.

“I wasn’t that nervous since it was a tied ballgame but there was still a lot of pressure in that because obviously we want to win and not have to go into overtime.”

This past weekend, the team, led by Cory holding the trophy, took a victory march across Diddle Arena.

“Before we went out there they asked me to hold it and everybody was like yes, you should be the one to hold it. It was pretty good to lift it up for everybody that was there for the basketball game.”

You may have heard that Cory comes from a soccer background.

“Well I started out playing soccer when I could walk.”

What you may not know is where his soccer training began.

“I’m originally from England. I was born there. My dad’s military so he was stationed over there.    I lived there til I was about 12. I learned soccer over there because that’s one of the biggest sports there is soccer.”

Back in the states, Cory was a two -sport athlete in high school and Dallas wasn’t his first high profile kick. The first happened his junior year.

“We were three points down in region game play and they sent me out to do a 59-yard field goal and that was probably the craziest part of my high school career is making that.”

That play put him on the radar of several colleges including WKU and he quickly realized he wanted to be Hilltopper.

“First off because of engineering program they have a good one here.  That’s what I’m looking to study and also just the family. I came here and the bond was great, coaches were great and it just felt like home.”

Munson and his teammates are already looking forward to building on last season’s success.

“Definitely got something to prove after the season we had last year, it’s just the start of what’s going to be something great.”

Munson is a freshman majoring in mechanical engineering. But after graduation he has his sights set on the NFL before pursuing that career.