Book by Tim Fulford selected as winner of Warren-Brooks Award 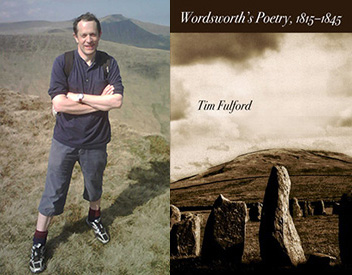 Wordsworth's Poetry, 1815-1845, written by Tim Fulford and published by the University of Pennsylvania Press, has been selected as the 2019 winner of the Robert Penn Warren-Cleanth Brooks Award for outstanding literary scholarship and criticism. The book award selection committee was deeply impressed with Fulford’s innovative use of close reading, a technique that Brooks and Warren advocated through critical texts like Understanding Poetry (1938).

In Wordsworth’s Poetry, Fulford examines Wordsworth’s less frequently studied later work, showing how his writing developed over the course of his life and was influenced by conversations with younger poets. The book offers a fascinating portrait of Wordsworth as a political poet and a poet with a keen understanding of history—and the challenges that go along with efforts to memorialize the past.

Fulford is Professor of English at De Montfort University. He is author of many books, including The Late Poetry of the Lake Poets: Romanticism Revised and Romantic Poetry and Literary Coteries: The Dialect of the Tribe. He is co-editor of Robert Southey: Poetical Works 1811-38 and the online publication The Collected Letters of Robert Southey.

Here's a listing of WKU events for Tuesday, February 18, through Saturday, March 7.