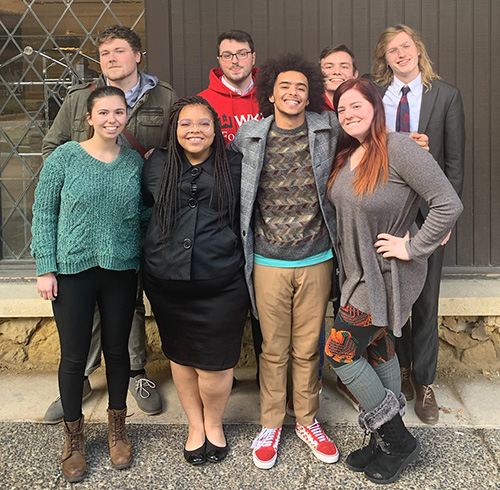 Debaters from WKU’s Forensics Team traveled to Saint Louis, Missouri, to compete at the Webster University “Gorlok Gala” the weekend of Jan 24-26.

WKU’s team of eight captured the top three ranks in Lincoln-Douglas, with sophomore Madelynn Einhorn declared the champion. WKU competed against 38 other teams at what is regarded as the largest and most competitive Lincoln-Douglas debate tournament in the nation, and a reasonable predictor of results at the national tournament in April. The last time WKU closed out the final round of debate at this tournament was 2017; the same year that WKU also closed out the final round at the NFA National Tournament.

Next weekend the team will travel to Champaign-Urbana, Illinois, to compete at the “Illini Stars” speech tournament.

Results from the Webster University “Gorlok Gala” are as follows:

“Our students have been equally impressive in embracing these new challenges and with their ability to adapt. They are the reason we do this – and we are honored by their continued commitment to their learning and by their faith in us to be their guides"

WKU summer 2020 courses will be offered online or through synchronous activities delivered with no personal contact. The Summer Scholarship will be increased to cover the cost of online courses for eligible undergraduate students enrolled in six hours.

As we finish our second week back to teaching and learning after an extended spring break, I have been heartened by the way you have stepped up to the challenge of continuing...