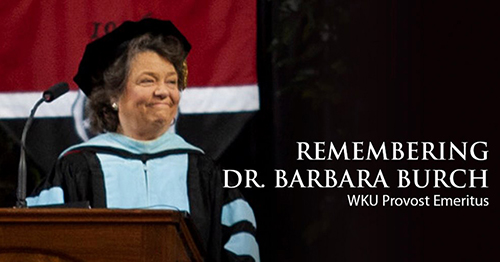 A funeral Mass was held Thursday (Jan. 9) for Dr. Barbara Burch, a former WKU Provost whose leadership and mentorship impacted the campus community for more than two decades.

WKU’s Amy Bingham has more on her legacy in this week’s View from the Hill.

“She had the biggest heart to go with the brightest mind of anyone I’d ever known. “ Those are the words Dr. Pam Petty used to describe her colleague and friend, Dr. Barbara Burch.

For the past three and a half years, many of those conversations happened here at the Kelly M. Burch Institute for Transformative Practices in Higher Education.

“This institute is named for her daughter who she loved more than life itself.”

It’s here that Dr. Burch’s legacy will be felt for generations to come.

“We don’t have to wonder what Barbara would have wanted.”

Burch graduated from WKU in 1959, before completing  her master’s and doctoral degrees at Indiana University.

She came back in 1996 as Vice President of Academic Affairs and later Provost.

“She loved every inch of WKU.  I’ve seen her both throw back her head, laugh and celebrate a WKU success and I’ve seen her go to tears over struggles.”

Petty says her loss is of national interest.

“We would go to conferences around the country and everyone knew her.  It was like being in an entourage.  Her entourage when you were with her.  People would get on the elevator and see her name plate and go oh my goodness, it’s Barbara Burch, oh can I get my picture made with you?”

As a transitional retiree, Burch was still co-teaching a leadership course with Petty, advising students and chairing numerous dissertation committees.

“She believed that all things good that could come to this university would come through that student success, one student at a time.”

Petty says no one will ever know how many times she opened her home and her wallet to make sure students had what they needed.

In lieu of flowers, expressions of sympathy may take the form of contributions to the Kelly M. Burch Institute, care of the WKU Foundation, 1906 College Heights Boulevard, Bowling Green, Kentucky 42101.