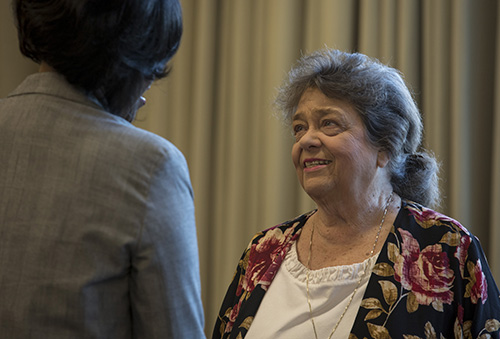 “The WKU family has lost a great academic leader and we share our condolences with the Burch family,” WKU President Timothy C. Caboni said. “She will be remembered for spearheading many of the advancements on the Hill, such as the creation of the Division of Extended Learning and Outreach, her role in the establishment of the Educational Leadership Doctoral Program and honoring the memory of her daughter with the creation of the Kelly M. Burch Institute for Transformative Practices in Higher Education. She also will be remembered for the hundreds of students she mentored.”

Dr. Burch earned a bachelor’s degree in English from WKU in 1959 before completing master’s and doctoral degrees at Indiana University. She returned to her alma mater in 1996 as the Vice President of Academic Affairs. Provost was added to her title in 1998 and she held those positions until 2010 when she focused her attention on the Educational Leadership Doctoral Program, civic engagement, internationalization and research. More: Dr. Barbara G. Burch tribute page

Dr. Burch also spent three years as the faculty representative to the WKU Board of Regents and recently chaired the WKU Sisterhood, a philanthropic organization that provides funding for innovative programs, and is the group’s current Volunteer of the Year.

“On a personal note, Barbara was on the search committee that brought me back to WKU and served as faculty regent during my first several months at the university,” President Caboni said. “She was invaluable during the transition and helped make sense of our complex institution and our opportunities for growth. I will miss her wisdom, her good counsel and her willingness to speak her mind to benefit our university, and more importantly, our students.”

Board of Regents Chair Freddie Higdon of Lebanon said Dr. Burch was Provost when he was appointed to the Board in 2009.

“She played a tremendous role in my introduction to the Board and to WKU in my role as regent. She extended a warm welcome, was an instrumental resource and constantly checked on me,” he said. “She was very endearing to me from day one, and we developed a true friendship as a result.”

When he began his first term as chair, Dr. Burch was serving as faculty regent. “She was instrumental in working through the budget – collaborating, agreeing and agreeing to disagree,” Higdon said. “She was also a member of the presidential search committee – very observant and involved and clearly articulated what we were looking for in a leader.”

Dr. Burch’s leadership extended well beyond WKU. She was a past president of the American Association of Colleges for Teacher Education and served in leadership roles in many other national organizations including the National Council of Accreditation of Teacher Education. In 2014, the American Association of State Colleges and Universities created the Barbara Burch Award for Faculty Leadership in Civic Engagement in honor of her “extraordinary national leadership in the design, creation and ongoing development of the American Democracy Project.”