View from the Hill: History of Harlaxton Manor 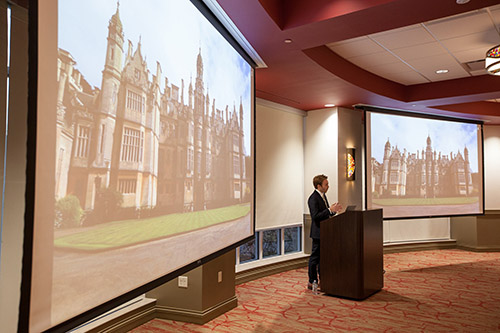 Since 2007, WKU has been sending students to Harlaxton College in England each semester.

In this week’s View from the Hill, WKU’s Amy Bingham talks to a WKU alum who has done a deep dive into the history of Harlaxton Manor and the eccentric man who had it built.

Which may explain why Carter Jackson loved living in Harlaxton Manor in the spring of 2016.

He returned two years later, this time working on his master’s thesis.

“I was looking for good case studies and to study interior 19th century architecture in Britain and there’s really nothing better than Harlaxton.”

The 2018 WKU alum recently returned to his alma mater to share his fascinating research on the manor at the Mahurin Honors College.

“It’s this crazy English style that really isn’t any specific form of architecture at all, it’s a hodgepodge so I’m trying to dissect what that hodgepodge of style is.”

Jackson says it took builder Gregory Gregory, a mystery himself, 20 years to build the structure in the 1800s and he died just four years later.

“He was a recluse, didn’t invite people over, he didn’t want much published on the house, but he had incredible collection of art in a great house, no one was ever able to decipher.”

Jackson insists his research is just a drop in the bucket but says he thoroughly enjoyed digging deeper into the place he called home for four months.

“I enjoyed walking around the manor at night, lights low  best way to consider how it was 180 years ago as someone who likes architecture that was special.”

Carter worked on his master’s at the University of York which is just a short train ride from Harlaxton. He gets his degree at the end of January and will begin applying to schools to pursue his PhD.