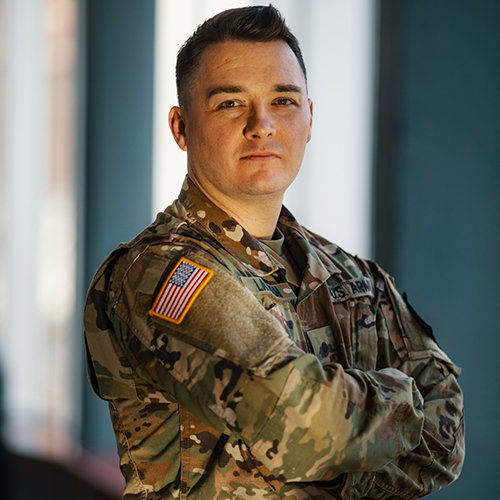 Cadet Justin Lawson, a graduate student in the Organizational Leadership program from Elizabethtown, will graduate with his master’s degree and commission as a second lieutenant this week. He will begin active duty as an armor officer. After completing his branch detail requirements, he will transition to the Adjutant General’s Corps when he achieves the rank of captain.

Lawson first became a Hilltopper in 2007 and completed his Bachelor of Fine Arts degree in Graphic Design in 2012. He worked various jobs after graduation before enlisting in the Kentucky Army National Guard in 2015 where he served as a military policeman. During that time, Lawson began working toward a degree in Art Education at WKU. He took several classes toward the degree, but his military responsibilities prevented him from finishing.

Instead of giving up on his educational journey, Lawson persevered, finding a way to financially support his endeavors by enrolling in the Reserve Officer Training Corps as a graduate student in 2018. At that time, Lawson realized his career aspirations of becoming an army officer.

“I liked the culture and stability of the Army and thought that the ROTC program would be the best career path for me and my family,” Lawson said.

After attending college off and on over the last 12 years, Lawson said he has learned that college is more about self-discipline than it is about knowledge.

“The experience is what you make of it,” Lawson said. “I had a lot of growing up to do early on. College takes a certain discipline and structure to get the most out of it.  It’s about utilizing those tools you’ve been given. I’ve had a lot of humbling experiences here. Humility makes you a better individual and professional as a whole. College is challenging, but it helps cultivate you into the professional you need to be to succeed in life.”

One thing Lawson looks forward to in his future career as a commissioned officer is breaking down some of the stereotypes associated with the role. He said the military officer is often seen as lacking empathy.

“It is common for new lieutenants to come to be out of touch with our most precious resource, the soldier. Luckily, my professional experiences and studies in the Organizational Leadership program have helped me understand that leadership is more about people and less about numbers,” Lawson said. “In the National Guard the officers and enlisted soldiers are more cohesive. They’re not seen as much like two classes of soldiers, but, from what I’ve heard, on the active duty side there is some division.”

Lawson said he prides himself on being self-aware and empathetic and hopes those qualities will serve him well throughout his career.

“I want to take the initiative to create transparency and to illustrate humility. It’s been a humbling journey to get where I am. I’m from a blue-collar family. I was a first-generation college student. I want to be able to relate from common ground to illustrate that we aren’t so different,” Lawson said. “My rank might be different, but at the end of the day, I want to show that I’m just me. I’m Justin.”