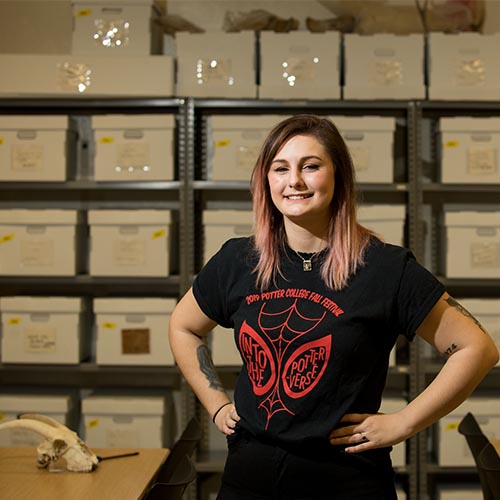 WKU anthropology major Hannah Banks will graduate on December 14 with three unique applied learning experiences that will hopefully pave the way for her future.

“I thought that I had so many opportunities to do so many different things here that I wanted to get my feet wet,” Banks said.  “And I wanted to be a well-rounded anthropologist and not just be able to talk about one sub discipline.”

As an archaeology field technician at Mammoth Cave, Banks’ position is part of a MACA Archeological Site Stewardship Program grant awarded to Dr. Darlene Applegate, Folk Studies and Anthropology Department Head.  “They do regular visits to archaeological sites in the park that are vulnerable to damage from natural and human impacts (such as water erosion and unauthorized excavations) and they document and assess conditions of the sites,” Applegate said.

“It was an opportunity that I did not want to pass up, once she (Applegate) asked me during my junior year at WKU,” Banks said.  “The impact of this work is that we are preserving sites from the previous people that inhabited the space. The land and the people who lived on the land are a part of Kentucky's history.”

After starting at Mammoth Cave, Banks spent the summer of 2019 living in a collaborative Western Mongolia Archaeology Project and Field School to learn archaeological field methods. In Mongolia, Banks learned various archaeological field techniques under the direction of Folk Studies and Anthropology Associate Professor Dr. Jean-Luc Houle. He directed the program which was a collaboration between WKU and the National Museum of Mongolia to learn more about nomadic herders during the Bronze Age.

“Hannah did it all. She engaged in the excavation of mortuary, ritual and habitation sites, participated in state-of-the-art archaeological geophysics, worked with our geoarchaeologist, and helped with ethnographic interviews. This all speaks to Hannah’s willingness to go above and beyond and go all in when it comes to her education outside the classroom,” Houle said.

Different from the previous two experiences, Banks’ independent study is working toward a greater understanding for those that have a chronic illness that may or may not even be fully understood or explainable.

“Autoimmune diseases are still not fully understood, so I wanted to interview people to get their perspective on their chronic disease even though medical research has not been able to fully pinpoint why these diseases are popping up,” Banks said.

Banks believes this project is a stepping stone for future research. “In the future, I'd be interested in addressing what puts women at a greater risk for autoimmune diseases, if access to healthcare changes things, and if food quality/nutrition can play a role in the development of these kinds of diseases.”

Hannah Banks came to WKU knowing that she wanted to pursue graduate school and eventually earn a PhD. While the three applied learning experiences described above will contribute to her academic success, she acknowledges four anthropology professors for their impact as well.

“...I found my home in the anthropology department and that has one-hundred percent made my experience better than I ever could have imagined. The four anthropology professors are fantastic and they inspired me to go after my own interests within the discipline,” Banks said. “Without them, I would not have been able to participate in any of these activities so I am very thankful for them and the opportunities that they presented me.”

Banks went on to acknowledge the faculty who contributed to her inside and outside the classroom experience in addition to Applegate and Houle. Department of Folk Studies and Anthropology Associate Professor Dr. Kate Hudepohl serves as Bank’s faculty advisor for her directed study. Although she did not work personally with Assistant Professor Dr. Ashley Stinnett, Banks expressed gratitude for Stinnett always trying to help her and give her advice.

“It's rare for students at other schools to be able to work in multiple subdisciplines of anthropology and it took me so long to narrow down my own interests that I'm very happy I got to do a little bit of everything,” Banks added.  “The four professors in the Anthropology department are truly amazing because they all bring different things to the table and they're willing to help you and give you opportunities to do many amazing things during your undergrad.”

For more information about WKU’s Department of Folk Studies and Anthropology, visit www.wku.edu/fsa.