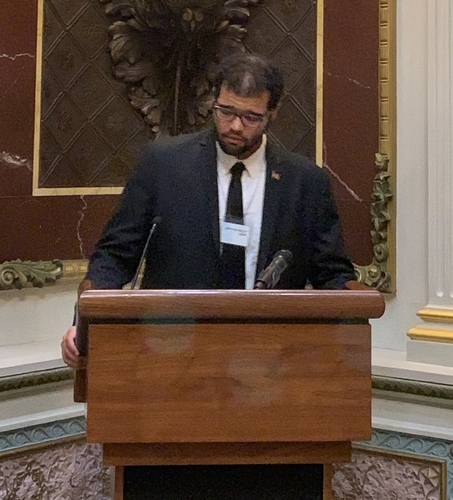 WKU alumni Deven Richardson from Bowling Green, KY, met his lifelong friend Koki White while at summer camp at the age of nine. The pair grew up together, had similar interests, and even graduated from WKU together in the spring 2019 semester. Along with a friendship spanning their whole lives, Deven and Koki had one major interest in common: Japanese language and culture.

Richardson’s passion for Japanese led to the decision to study the language while attending WKU, resulting in many opportunities, life changes, and successes for the Political Science and International Affairs double major. “When I first began Japanese, I had no idea where the path would take me,” stated Richardson, “I knew I would study abroad, but I had no clue about the opportunities that would emerge for me upon my return.”

Richardson’s first study abroad experience in Japan was truly life changing and would become the first step in his very successful academic career. “My first visit to Japan was truly amazing. I made lifelong friends, developed in the language significantly, and had the opportunity to travel and experience the culture first-hand. It was really a dream come true.” Richardson’s immensely positive experience in Japan is shared by many students who chose to study abroad; WKU offers study abroad placements in many different countries, allowing students to experience a vast range of cultures and languages.

While Richardson was appreciative of his experience in Japan, the trip did come with one unique challenge: a pretty large height difference. “Some parts of Japan are not really equipped to handle people of my height,” stated Richardson. A study abroad experience in Japan is accessible to any WKU student. However, tall students be aware: fitting through low doorways may be a challenge!

Richardson’s experience in Japan was positive and formative, ducking through doorways aside. After returning from his trip, Richardson became a study abroad ambassador. He applied for the opportunity while still on his study abroad trip in Japan, and was immediately accepted for the position upon his return to WKU. Being able to share his experience with other students allowed Richardson to express his passion in a way that helped others. “The thing I enjoyed most about being an ambassador was helping individual students choose the [study abroad] programs and countries they wanted to go to and helping them achieve their dream.” For WKU students who have already traveled abroad, becoming an ambassador allows opportunities for sharing their experience and reaching other students with similar interests; for students interested in studying abroad, ambassadors are there to help guide and mentor students through the process of planning a study abroad experience.

Richardson is currently in Japan on a Fulbright Grant, completing a research project analyzing the current perception of Japanese college students regarding political and economic issues involving the United States, and how these issues may affect the future. The Fulbright Grant is a grant awarded to applicants wishing to complete research in another country; the grant is highly selective and requires extensive planning and preparation to complete. Richardson was not only working on his Fulbright application, but also working on graduate school applications and scholarship applications. Balancing the application process with his ambassadorship and others coursework was very difficult. Richardson’s Fulbright application underwent many revisions and received extensive feedback from professors before he submitted the application.

When asked for advice to share with other students interested in applying for the Fulbright Grant, Richardson stated: “The best advice I could give to students going through a similar time is to work on your time-management skills. It is truly very crucial as you progress through college and will be very beneficial long term. For students wanting to apply for the Fulbright, I would recommend they begin early as possible. It can be very time consuming and it will make your application much stronger if you begin early.”

After completing his research project and finishing out the Fulbright Grant, Richardson will be returning to the United States to pursue an MA in Science in Foreign Service at Georgetown University in Washington, D.C. After graduating, Richardson plans on becoming a U.S. diplomat. Outside of Richardson’s interests in Japanese culture, he enjoys sports, working out, playing videogames, and cooking. Naturally, Richardson also loves to learn about new places and exploring.

For more information on WKU’s study abroad program, visit the Study Abroad and Global Learning office in HCIC 1014, or visit their website. For more information regarding the Fulbright Grant, visit https://www.wku.edu/oip/wkufulbright/. The Office of Scholar Development aids students in identyfing and applying for prestigious externa opportunities like the Fulbright Grant; visit them in HCIC 1045, or their website at https://www.wku.edu/osd/contact/index.php.