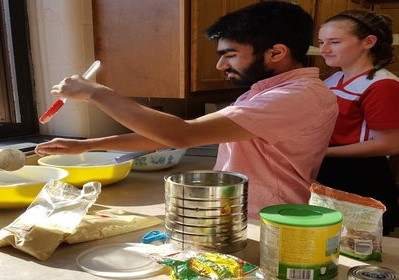 The WKU Modern Languages Department recently held the Arabic Culture through Food Event, in which students prepared traditional Arabic food for the enjoyment of all who attended the event. The kitchen was crowded with students enrolled in Arabic classes or involved in the Arabic Club, as well as three native Saudi Arabian students who volunteered to help prepare the food and to speak Arabic with students attending the event.

The menu included traditional dishes such as: hummus with pita, baba ganoush, falafel, chicken shish kabobs, and Morrocan vegetable tagine (stew) with cous cous. Condiments included hand-made tahini and dogous (Arabic salsa), and drinks such as Arabic coffee with cardamom, and Aryan, a Turkish yogurt drink.  For the finale, a beautiful dessert of Babousa (a semolina-based yogurt cake) was prepared.

Over seventy individuals attended the event, not including the student-cooks; the event was a big hit, with attendees quickly devouring the entirety of the falafel and kabobs made for the event. The Arabic Coffee and Aryan yogurt drink were also very popular; the most popular aspect of the event, however, was the opportunity for students to experience Arabic culture first-hand.

Instructor Julie Lee,of the Nutrition and Dietetics Program, oversaw the event. “I believe food is a great way to get to know a culture – it is a good ice breaker. Everyone loves to eat!” said Lee. “People love to share their favorite foods with others. Most people are more likely to try new foods if they have a chance to help cook it or see how it is made. The students in the Arabic Club are all studying Arabic, so this was a great way to introduce them to some of the foods and culture, as well as express and demonstrate the variety of foods and different cultures across the Arab world.”

Julie Lee’s interest in Arabic culture is not limited only to the food; the instructor is currently taking Arabic and hopes to travel to Saudi Arabia and Egypt in the future. “I have travelled internationally several times before, and this seemed like a great next part of the world to explore!” Lee was also encouraged to learn the language and culture by several of her Arab students, who also supported her during the Arabic Culture through Food event. Lee’s Arabic instructor, Lhousseine Guerwane, also encouraged Lee to organize the event. The students were able to learn about Arabic culture while also enjoying the fruits of their cooking. Turnout for the event was two to three time larger than Lee expected, and yet they never ran out of food!

Student Anissa Roberts, who is currently enrolled in Arabic classes and is a member of the Arabic Club, discussed what made the event such an impactful experience. “I learned a lot about cooking, and a few Arab words for various spices and kitchen utensils. I didn't really know much about cooking or Arabic cuisine; after the event though, I'm confident in my falafel cooking abilities since that's what I spent most of my time at the event cooking. I enjoyed the event so much! It is my favorite Arabic Club event we have had this year.  I would absolutely go again and encourage my friends to come too!”