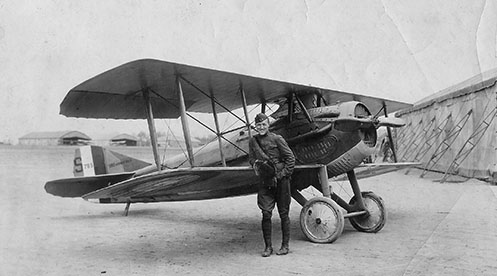 Victor Strahm standing next to a French SPAD XIII Fighter aircraft at an airfield in France, 1918. (Photo courtesy of Library Special Collections)

Brigadier General Victor H. Strahm. a Bowling Green native and member of WKU’s Hall of Distinguished Alumni, was enshrined in the Kentucky Aviation Hall of Fame on Nov. 16 in Lexington.

Presenting Strahm for enshrinement in the Kentucky Aviation Hall of Fame was retired U.S. Air Force Lt. Col. Gilbert T. Calhoun. Mary Lucas received a plaque and a medallion honoring Strahm. Calhoun and Jonathan Jeffrey joined her on stage in accepting the awards. Calhoun, Lucas and Jeffrey are authors of That Perfect Feeling in the Air, The Life of Brigadier General Victor H. Strahm.

About Victor H. Strahm: Victor Strahm graduated from Western Kentucky State College (now WKU) in 1915 and then immediately enrolled at the University of Kentucky to study engineering. In 1917, he volunteered for the U.S. Army and answered an advertisement for soldiers to volunteer for the U.S. Air Service and after graduation from flight school, he was on his way to France to fly for the 91st Aero Observation Squadron. An air ace, he downed five German fighter aircraft, three of which were Fokker D-7s, the best in the German inventory while flying the French-made Salmson 2A2 reconnaissance aircraft.  After WWI, Strahm was loaned from the Army to movie companies in Hollywood as a technical advisor and later became a stunt pilot. In addition, he flew in several national air races, winning the 1924 Southern Air Tournament. At the beginning of WWII, Strahm was serving on the air staff in Washington, D.C., but was soon ordered to join Major General Lewis Brereton, commander of the U.S. Tenth Air Force, in Calcutta, India. There he served as a principal planner for flight operations "Over the Hump" to supply crucial war materials to the Chinese Nationalist forces and the U.S. Tenth Air Force, formerly known as the "Flying Tigers." In 1942, Strahm was transferred to Egypt to assist in the reorganization of the U.S. Army Middle East Air Force. In 1943, Strahm was transferred to Great Britain to assist in the reorganization of the Ninth U.S. Air Force in preparation of the Allied invasion of Normandy on D-Day, June 6, 1944. After WWII, Strahm served in both the newly created Air Defense Command and the Strategic Air Command. Strahm died on May 11, 1957. He is buried in Shreveport, Louisiana. He was inducted into WKU’s Hall of Distinguished Alumni in 2012.