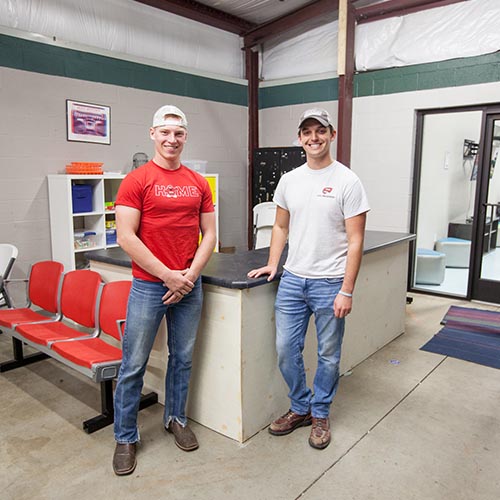 WKU students Cruz Murphy and Colton Mcglone truly understand what it means to have a heart to serve however they can within the community. Mcglone and Murphy designed and built a shelving unit for the Boys & Girls Club of Bowling Green in hopes that it would be a safe place that the children could come to check out games. What would have been a $3,000 project, the two completed for only $500.

Lauren Hayden, Marketing and Development Coordinator for the Boys & Girls Club, learned of Mcglone and Murphy’s previous building projects which in turn prompted her to ask for their help. Mcglone majors in Civil Engineering, and Murphy studies Construction Management.

“Cruz and I have worked together for a while now and always work extremely well together, but I think the biggest thing for us is that we just love to help people,” Mcglone said. “Ever since we both came to college, we have made it a point to serve others in any way that we can. We work together on Midnight on the Hill to raise money for St. Jude and with student United Way.”

“Most volunteers come and do more hands-on classroom help. Colton and Cruz’s background in construction allowed them to actually build us a structure that can be used every single day by the kids here at our non-profit,” Hayden said.

Hayden expressed how grateful she was for Murphy and Mcglone’s desire to help. According to Hayden, this form of community service is much different than the kind that they normally see.

“Colton and Cruz were amazing and never asked for anything in return. We are so thankful that they were able to come in and provide us with a different, but extremely impactful kind of service,” Hayden said.