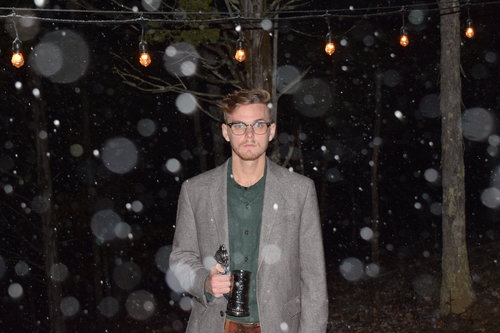 Senior Ashton Adams was raised in Shelbyville, Kentucky, and attended Martha Layne Collins High School, where he took German with Frau Monica Brian as his language elective. Adams comes from a family with an extensive German and Austrian background and takes pride in his proficiency in the language of his ancestors. When Adams enrolled at WKU in the fall semester of 2015, it seemed a no-brainer to major in both of his passions: German and Cultural Anthropology. Adams will be graduating in December of 2019.

Adams’ original plan was to join the military or a federal agency, and he pursued anthropology thinking it would provide an excellent foundation for serving overseas. As his college career progressed, Adams decided that he and the federal service were not the right fit for each other. Having already started a Brewing and Distilling Arts and Sciences certificate, he decided to pursue brewing and distilling as a career. Adams’ history with beer goes way back, almost as far as his German/Austrian lineage. “I have always had an appreciation for high quality beer and come from a lineage of backwoods Appalachian distillers and winemakers, so I felt that I could naturally take up the craft of producing high quality beer as a profession,” explained Adams. “Also, the fact that I could brew and drink beer (quality control purposes only) for a profession was quite attractive to a twenty-one-year-old college student.” Not only was brewing and distilling a fun passion to pursue, it offered Adams flexibility when it came to career choices post-graduation. “Pursuing the certificate also gave me some peace of mind. I knew that with it I would have greater potential to work in various industries outside of my major.”

During the summer of 2018, Adams was able to study abroad in Munich, Germany. “Studying abroad was a once-in-a-lifetime opportunity,” stated Adams, “and the linguistic immersion it provided is one of the main reasons I have been able to develop advanced proficiency in German and an informed understanding of German culture.” Adams stayed with a host family and completed two courses with the Kentucky Institute for International Studies (KIIS) while there. For Adams, having to communicate solely in German was intimidating, but he soon became comfortable relying on his linguistic skills to communicate effectively with his host family and peers. While in Germany, Adams was able to further develop his passion for brewing by touring German breweries and beer gardens. His favorite was the Ayinger Privatbrauerei in Aying, Germany. He also had the opportunity to defend American beer. “My visit to the Ayinger Privatbrauerei was a truly enjoyable experience, despite the tour guide’s harsh opinions on American craft beer,” explained Adams. “The small town of Aying sits in the scenic Alpine foothills on the outskirts of Munich, and the brewery and accompanying beer garden seemed as if they lay frozen in time.”

For Adams, being able to live and operate in Germany for a time established a greater appreciation for German culture, which impacted Adams’ own lifestyle. After experiencing stellar public transportation services in Munich, Adams’ finds some public services in the U.S. lacking, and full of room for improvement. Adams did experience a bit of culture shock and found some Europeans to have a low opinion of American education systems, and often found himself being intellectually underestimated by many. “By far, my least favorite memory from my study abroad experience was being intellectually underestimated by Europeans on a regular basis,” stated Adams. “Europeans often have a very poor opinion of the quality of the American education system, and this perception would occasionally manifest itself in incorrect assumptions of my own knowledge and abilities. I tried to contain myself as much as possible when this would begin to irritate me, but at times I found myself fact checking individuals or suddenly providing very detailed input into conversations that German speakers did not even realize I was following.”

Overall, Adams believes he represented his home country well, and recommends study abroad, as well as learning a second language, to any interested student. “Studying abroad will help any student gain a greater understanding and appreciation for the world as a whole, as well as provide a valuable experience that could benefit them later in their professional career.” With many opportunities at WKU to study abroad affordably, including scholarships and programs, studying abroad is within reach for any WKU student.

After Adams completed his BDAS certificate in the summer of 2019, Stephanie Turner of the WKU Arts Department contacted Kore Donnelly, founder of local brewery Blue Stallion. From there, Dr. Kristina Arnold, Head of the WKU Arts Department, introduced Adams and Donnelley, who worked out an internship for that summer. Adams enjoyed his time with the brewery immensely, and he was able to learn a great deal about the brewing industry and brewing process during his internship with Blue Stallion. “The skills and knowledge I acquired at Blue Stallion will undoubtedly make me a more appealing and competitive candidate when I enter into the brewing industry. I certainly learned that brewing is not an easy business, and it can be quite tiresome at times. I realized that it takes a great deal of passion and personal commitment to flourish in the industry.” Internship opportunities are available in many WKU departments of study, offering flexible options tailored to student’s interests and fields of study.

During the spring semester of 2019, Adams set to work on his Personal Learning Plan (PLP), under the watch of German professor and Head of the Modern Languages Department, Dr. Laura McGee. Dr. McGee developed the PLP to allow students to create their own plan of study in order to meet the course objectives for that semester, allowing her students the flexibility to develop their own interests within their field of study. Students created their own PLP, including setting their own deadlines and finding their own source materials for their project. For his PLP, Adams decided to research various beer styles with German sources. Afterwards, Adams would utilize his research in carefully crafted overviews of the style. Essentially, Adams was writing reviews for German beers, in German, a project he enjoyed immensely. “I enjoyed this style of teaching very much, because it placed the outcomes and pace of my classwork into my own hands. I truly believed this improved the quality of my work and the passion I developed while I was completing [the PLP project].”

After graduation, Adams plans on pursuing a sales position, his motivation being to accumulate the financial resources to relocate to an area with more opportunities in distilling and brewing. Adams has also discovered an aptitude for sales and has recently been approached by a cultural resource management firm primarily operating in the American West and Southeast Asia. Adams intends to pursue the opportunity to see if he wants to pursue anthropology again, as a field technician. Adams believes that his specialization in German, Cultural Anthropology, and Brewing will make him a desirable job candidate within the U.S. and Germany. “My anthropological and German language skills make me an excellent individual to facilitate business between two differing groups in a culturally sensitive manner,” explained Adams, “I hope to implement this skill set in the German beer industry, perhaps in furthering the expansion of German brands in the US or vice versa. Once I gain a bit more experience and financial flexibility, I plan on making the leap and putting myself on the German or greater European job market.” For now, Adams is utilizing the resources and opportunities available in Kentucky to further his studies and skills.

Adams received the Regents Scholarship and is currently a Potential Scholar of the College for Potter College for the graduating class of Fall 2019. Congratulations on your graduation, Ashton!

For more information on study abroad, visit the Study Abroad and Global Learning office in HCIC 1014. Interested in taking German as a language? Contact Dr. Laura McGee at laura.mcgee@wku.edu. Interested in a BDAS Certificate? Contact Dr. Kristina Arnold at kristina.arnold@wku.edu.