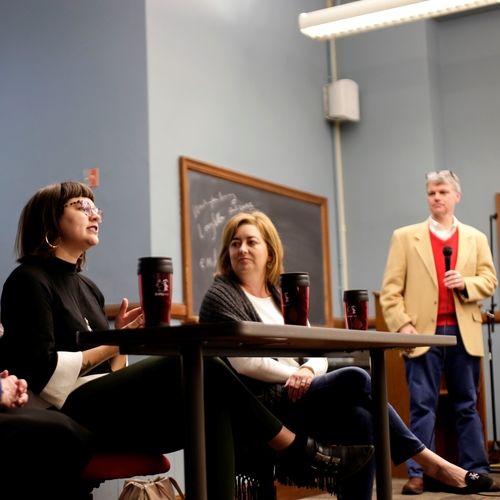 On November 15, 2019, the WKU Department of English hosted a capstone panel entitled “Maintaining Intellectual life after Graduation.” The purpose of this capstone panel was to have alumni share advice and wisdom to upcoming graduates on how to maintain a creative, rich, and intellectually fulfilling life after graduation.

Each panelist answered questions both from Dr. Hale and students about how their time at WKU enriched their intellectual spirit and about how they have maintained that spirit since graduation. Panelists were first asked why they chose to study English as an undergraduate. For Sam Ford, the reason was the type of skills that English had to offer.

“[I enjoyed] the critical thinking skills that the English classroom brought to the fore and the way it made me think about all sorts of things I was doing at the time,” said Ford.

Dr. Hale then asked the panelists about what interested them as an undergraduate and about what they gravitated towards as an English major. Pamela Napier expressed her love for all things English, but especially for linguistics.

“When I had children, I watched their language go from absolutely nothing to intellectual human beings,” said Napier. The development of language is just so fascinating that I think I will continue studying it until the day I die.”

Allison Gardner Willian kept the panel lively by sharing her fond memories of professors. When Dr. Hale asked the panelists what they missed most about being an English major, Gardner did not hesitate to talk about the relationships she fostered with her professors.

“I really missed them because that was a big part of my support system,” said Willian. “I’ve stayed in touch with them since I graduated in 1999. It’s just being able to have conversations with them.”

The next question panelists responded to focused on how literature and writing have been an impactful part of their life outside of the professional world. Alayna Milby talked about the personal benefits of English outside of the classroom and workplace.

“For me, reading and writing is a form of self-care,” said Milby. “The work that I do—which is working with survivors of sexual assault—can be really overwhelming. I have found that, sometimes, a book that has no intellectual ‘value’ can be really relieving.”

To conclude the panel, a student asked the panelists what advice they had for English majors who are getting ready to graduate. Each panelist responded with different ideas. Pamela Napier advised students to “be open to anything that comes along.” Allison Gardner Willian discussed the importance of having a presence on LinkedIn to make professional connections.

Finally, Sam Ford expressed how English prepares graduates for telling stories and how they can use that skill to achieve their goals.

“Think about the story you can tell about the experiences that you’ve had here,” said Ford. “Your resume will say one thing…. but you’re the only person who has had the exact experiences you have had, and that can be a competitive advantage if you think about how to bring out that inner voice.”