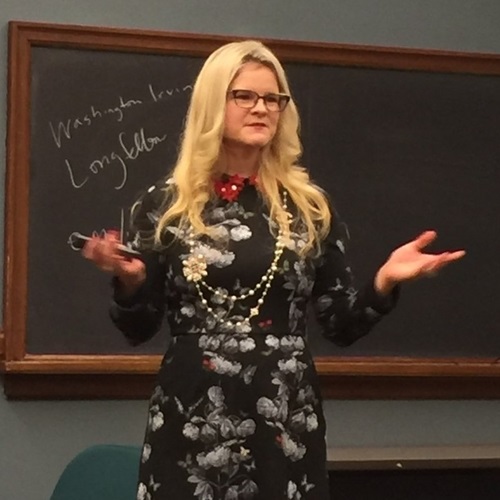 On Saturday, November 9th, the WKU Writing Project hosted the Writing that POPS: Using POP Culture to Teach Writing conference. The conference was open to primary and secondary educators who wanted to learn new ways to teach writing to their students. This year’s conference focused on using pop culture in the classroom in order to engage students and teach them writing skills that will benefit them in and out of class.

Jon Meyers and a team of volunteers organized the conference. Meyers also spoke about pop culture’s place in American history, specifically about how pop culture can influence what we believe to be true by citing a clip from Game Changers with Vicki Abelson. In the clip, Robert Wuhl discusses Henry Wadsworth Longfellow’s 1861 poem “Paul Revere’s Ride.” Meyers said, “The truth is that Paul Revere was arrested after 12 miles, and never got to warn anybody about anything. The real guy who warned that the British were coming was a guy named Israel Bissell – but Longfellow never wrote a poem about him.” This example effectively demonstrates the power that pop culture can have over how people are educated. Meyers said that because of this “it only makes sense that we as teachers encourage our students to harness that power in their writing.”

Dr. Cindy Childress, a ghostwriter for many best-selling books and a 2000 graduate of WKU’s English Department, was the keynote speaker at the conference and gave a talk about building your brand in pop culture and how that applies to students. “More and more Gen Y young adults say they want to be influencers and brand ambassadors. English Departments should be at the forefront of teaching the necessary writing skills to help students step into those roles and know what kind of work it takes to be successful,” said Dr. Childress. “A great deal of content creation involves writing, even when the final result is an audio recording of a podcast or a video. In fact, I believe that every adult needs an authority platform, which will give you multiple streams of revenue, plus versatility and leverage in the job market.”

Larissa Haynes, an English teacher from Allen County Schools, was one of those in attendance at the conference. “I was amazed at the usefulness of ideas and resources, most of which were immediately practicable for my classroom,” said Haynes. “It was a great opportunity for beginning teachers to steal ideas and resources that could help them plan out a whole semester of argument, research, analysis, narrative, and more. Even a veteran teacher like me was scribbling ideas and writing down contact information like mad!”

The WKU English Department aims to inspire local teachers to include new, effective teaching strategies in their classes. Dr. Rob Hale, Head of English at WKU, said, “The English Department is working hard to create programming to support English teachers. Even though federal and state funding for National Writing Project has been cut, we’re investing our own resources to improve writing instruction in our region. By all accounts, Writing that POPS: Using POP Culture to Teach Writing was a huge success.”

The Kentucky Museum will be featured in a Dress & Drinks webinar on March 24, 2021 at 7:00 p.m. EST. Join Sandra and her colleagues, Dr. Carrie Cox and Nancy Richey, to discuss the collections at the Kentucky Museum.