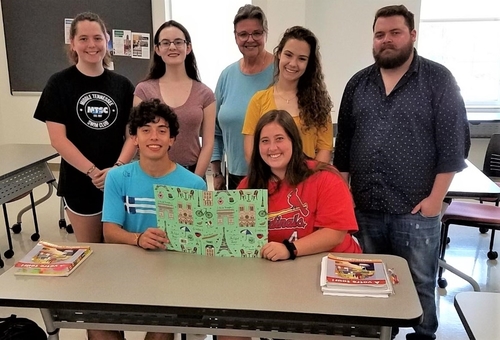 Dr. Egloff’s French 201 students have all pledged their allegiance to the language and culture of France. The class holds seven students, five of whom have been enrolled in the program for three consecutive semesters already.  In the spring of 2019, some of the students participated in a cultural event where they presented a traditional French dance. The class is looking forward to participating in another cultural event soon. Student Carol Eyerman loves not only the language, but the culture as well, stating “I am an avowed Francophile! I simply love all things French. French food, French culture, French art, and especially the language of love.  I think French is the most beautiful language when spoken well.” Carol has been to France multiple times, much like her classmates.

The class has another interesting feature, a diverse international background. Class members have traveled abroad a lot; some students come from different countries such as Brazil and Germany. Student Liz Peterson just came back from a spring study abroad program in which she visited Paris, London and Rome. ”These are the three cities that I grew up dreaming of living in ,” said Liz, “and with the study abroad program, I’m able to say I’ve lived in all three.” Liz’s favorite experience traveling abroad was the host family she stayed with in Paris. “The couple I stayed with became like grandparents to me,” stated Liz. “We had dinner together every night where I learned about their day to day lives as Parisians, and they also learned from me about America. Many evenings we sat around and talked about different political or social topics and we were all able to bring a different perspective to the table.  They were easily the most important and influential aspect of my time abroad.”  The Modern Languages department offers many opportunities for studying abroad to France, as well as many other countries.

Several levels of French classes are available for the upcoming spring 2020 semester, including Elementary French II, Intermediate French II, French Civilization and Culture, and Advanced French Conversation. Not sure where to begin? Contact Dr. Karin Egloff at karin.egloff@wku.edu for more information!