2 selected for induction into Kentucky Teacher Hall of Fame 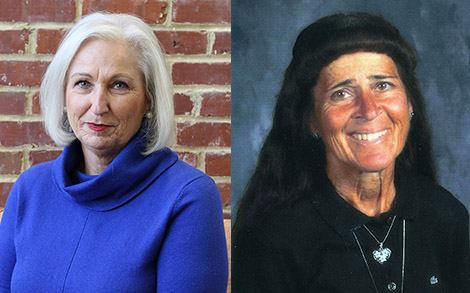 Wanda Carol Clouse (left) and Lynn Riedling (right) will be inducted into the Governor Louie B. Nunn Kentucky Hall of Fame next spring.

Two members of the 12th class of the Governor Louie B. Nunn Kentucky Teacher Hall of Fame have been selected.

The statewide selection committee has chosen Wanda Carol Clouse of Barbourville and Lynn Riedling of Louisville for induction at the 2020 induction ceremony next spring on the WKU campus in Bowling Green; details will be announced later.

Wanda Carol Clouse, a native of Barbourville in Knox County, earned her bachelor’s (1972) and master’s (1976) degrees from Union College and her Rank I Supervisor of Instruction Certificate from Eastern Kentucky University (1980).

Clouse was the first person in her family to earn a college degree. Soon after graduation from Union College, she received the keys to her first classroom at Boone Elementary (1972). Clouse recalls that her knees shook as she said “I can do this, this is my shot. I knew teaching was my life’s calling and there was nothing else in this world I wanted to do more.”

Clouse was hired soon after Boone Elementary first became integrated through federal busing. She became an “unofficial” ambassador for Boone Elementary to African-American families and their students as everyone was going through a considerable amount of adjustment. “I did many home visits, alone and with other teachers I recruited, those first several years to reassure our African-American families that we would do whatever we needed to do to treat their children equally and safely,” she said.

As an educator, Clouse is described as nurturing, creative, dedicated and inspirational by her former students and peers.

Marsha Detherage, a former colleague, noted: “Carol never wasted any opportunity to help her students succeed. I was in awe of her.”

In 1992, Clouse closed out two decades at Boone Elementary to take a position as principal at Girdler Elementary School. Following her retirement in 2000, Clouse has remained active in the field of education. She has served as a reviewer for the Kentucky Education Professional Standards Board (EPSB), as a trainer for the St. Cloud State University Co-Teaching model for student teaching placements, and acts as a trained accreditation examiner for the National Council of Accreditation for Teacher Education (NCATE). Clouse currently serves as an Associate Professor of Education at Union College in the Educational Studies Unit where she is an invaluable resource in preparing education students for their future career as classroom teachers.

“Mrs. Clouse is the type of teacher I want to be when I get my first classroom. She’s tough, but she wants us to be the best and able to provide our students with the best,” said Alexander Bell, third year education student at Union College.

A native of Louisville in Jefferson County, Lynn Riedling began her teaching career in 1982 in the private school sector. Then in 1987, Riedling transitioned to Jefferson County’s Stephen Foster Traditional Academy in Louisville, where she has taught first grade students for more than 33 years. Riedling earned her bachelor’s (1982) and master’s degrees (1984) from Indiana University Southeast and her Rank I Reading Specialist Certification from the University of Louisville in 1986.

Students, parents and colleagues alike recognize Riedling as being dedicated to making sure students have the skills necessary to be successful academically and personally.

Riedling is committed to developing interesting and challenging lessons for her students. One such project in 2017 involved her first graders researching, writing, illustrating, and publishing a book titled Dinosaurs. That year Riedling’s first grade class was chosen as one of the Studentreasures Publishing National Book Challenge winners based on originality, creative storyline and illustration.

Kristen Rollerson, a former student, shared: “I was told I could be anything I wanted and Ms. Riedling was the catalyst to my success. Her charisma and grace with every lesson-plan developed more than just young minds; she developed character.”

Riedling has been described by her colleagues as a teacher leader. In fact, Riedling was chosen, by her peers, as the first recipient of the annual Teacher of the Year Award at Stephen Foster Traditional Academy in 2013, and she received the award again in 2019. She is the only teacher from her school to have received the WHAS Excellence in the Classroom and Educational Leadership (ExCEL) Award in 1998. Assistant principal, Nikita Tillman, shared that “Ms. Riedling utilizes research into her practice and her classroom instruction and environment are indicative of that.”

Over the years, Riedling has served as a KTIP mentor to first-year teachers, both in her home school as well as neighboring community schools; she has organized and supervised the Extended School Services (ESS) program at Foster Academy for 18 years, led many professional developments for colleagues, and she volunteers her time at most every after-school event.

Sharita and Dwight Bransford, parents of former students, shared: “She (Riedling) was encouraging, supportive, and when my son struggled with reading, she made certain that he received all the extra help he needed to grow as a reader. He was reading above grade level by the end of the school year! I am grateful!”

Riedling’s principal, Letisha Young, stated that: “I know Lynn to have a great character, a strong work ethic, and a tremendous heart for educating students, especially those of the inner city. Students are eager to enter her classroom daily, excited about what they will learn next. She is the definition of a Hall of Fame teacher.”