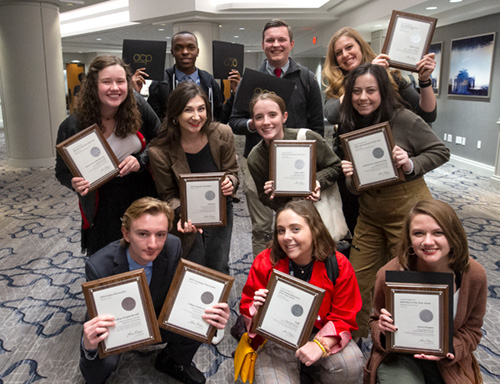 Students working on the Talisman, College Heights Herald and Cherry Creative were recognized with a combined 15 awards during the National College Media Convention held in Washington, DC, Oct. 31-Nov. 3.

The Herald was recognized as a Pacemaker finalist in both the newspaper and online categories. The Herald editor-in-chief during fall 2018 and spring 2019 was Louisville senior Evan Heichelbech.

The Talisman was recognized as a magazine Pacemaker finalist. The 2018-2019 editor-in-chief was spring 2019 graduate Hannah Good from Alexandria, Kentucky.

The Pacemaker, awarded by the Associate Collegiate Press, is regarded as the nation’s highest honor for student-run publications. Talisman has received 20 Pacemakers, and the College Heights Herald has received 17.

In the Associated Collegiate Press individual awards, nine entries from WKU were recognized.

In the College Media Association Pinnacle Awards, three entries from WKU were recognized.

Chuck Clark, the director of Student Publications, and Sam Oldenburg, the adviser to Talisman and Cherry Creative also attended the conference. Clark is a member of the Associated Collegiate Press board of directors and presented in a panel session on building alumni support. Oldenburg presented two sessions during the conference, “Photo editing: more than meets the eye” and “Get your head in the game: Sports photography tips.”