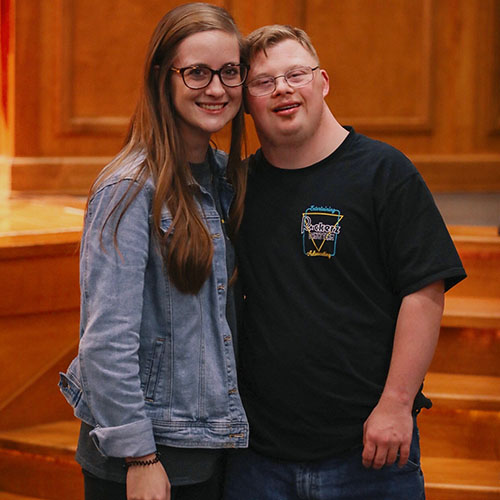 Best Buddies hosted one of their largest fundraisers of the year on November 6, Fashion for Friendship, but the heart of organization takes place behind the scenes every week in pairs.
Best Buddies International is a nonprofit organization dedicated to establishing a global volunteer movement that creates opportunities for one-to-one friendships, integrated employment, leadership development, and inclusive living for individuals with intellectual and developmental disabilities (IDD).
“Here at WKU, we match WKU students with individuals over the age of 18 in the Bowling Green community who have disabilities. Through the matches, the pairs cultivate a normal friendship and do things that typical friends would do with one another,” said Abby Bracey, WKU senior Special Education / Elementary Education major from Hendersonville, TN. Bracey is the president of Best Buddies at WKU.
The WKU chapter consists of 102 members, and some of the members serve as Peer Buddies, which are college members who are matched in a one-to-one friendship with an individual with a disability. According to Bracey, pairs may go out to eat together, go see movies, go bowling, attend sports games on campus, etc.
The Fashion for Friendship brings together members of Best Buddies and Greek fraternity and sorority members in a fashion show.
“All of the money raised goes directly to supporting our mission of inclusion for those with special abilities,” Bracey said. “The buddies will strut their stuff on the runway sporting their letters for the night, alongside one member from the organization they will be representing.”
The winner was presented with an award at the event, and they will also win a social event of their choice with the Best Buddies chapter to be redeemed at any point during the 2019-2020 calendar year.
Bracey added, “We hope that this event brings awareness to the need for inclusion for those with disabilities, and that students and community members will see the joy that comes from being kind to everyone regardless of ability level. We hope that attendees will see that friendships with people who have special abilities can be incredibly valuable, lasting, and life-changing!”
Abby Bracey joined Best Buddies in high school, and is now in her eighth year with the organization.
“My buddy is Alex Embry and this is my second year being paired with him! He is one of my best friends, and I laugh more with him than I do anyone else,” Bracey said.
Bracey plans to be a special education teacher with the dream of being an advocate for those with special abilities. She wants to show everyone what her students are capable of, rather than what they are not.
“I believe that everyone can benefit so much from seeing the worth of individuals with disabilities, and that the world would be a better and much kinder place if everyone believed that we are all truly more alike than different. I’ve learned so much from all of my friends with special abilities, and I wish that for everyone,” Bracey said.
To learn more about Best Buddies, visit https://www.bestbuddies.org or follow the campus chapter on Facebook and Instagram.
To learn more about being a special education teacher, visit www.wku.edu/ste.