WKU to observe Veterans Day at ceremony on Nov. 11 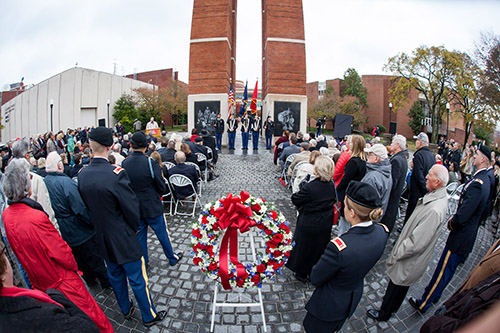 WKU will observe Veterans Day at 11 a.m. Nov. 11 with a wreath-laying ceremony at the Guthrie Bell Tower followed by the ROTC Hall of Fame Induction Ceremony.

The Veterans Day ceremony will include remarks from WKU President Timothy C. Caboni.

The ROTC Hall of Fame Induction will begin at 11:30 a.m. in the Stansbury Concourse on the second floor of Diddle Arena. The 2019 ROTC Hall of Fame inductee is LTC (Ret.) Joseph F. Scates, a 1966 graduate who retired from the U.S. Army in 1990.

Joe Scates, born in Bowling Green in 1942, entered Western Kentucky State College as an Industrial Arts major with a minor in German in June of 1960. Joe found his real love in the Military Science program at the beginning of his second semester. He immersed himself in the program, became a Pershing Rifleman, and declared ROTC as a second minor. To help fund his education and to stay current in the military while not in school, Joe enlisted in the US Army Reserves and served as a Basic Training drill instructor at Fort Knox.

Graduation and commissioning finally came Joe's way in August of 1966 when he became a dashing young lieutenant of Armor and Cavalry. 1LT Joe Scates arrived in country in December 1967 and assumed the duties of an Armored Cavalry Platoon Leader prior to the deadly Tet Offensive of 1968. It was during this time that 1LT Joe Scates earned a reputation as an aggressive leader at the front of any action his platoon encountered.

On February 2, 1968, Joe and his platoon were participating in a reconnaissance in force operation near Ton Son Nhut Air Base in Saigon. After being ordered to flank a large Viet Cong force, an intense battle ensued, and two armored assault vehicles were disabled due to direct hits from enemy fire. LT Scates maneuvered his tracks forward to assist his fellow cavalrymen exposing himself to concentrated hostile rocket and automatic weapons fire.  Undaunted, he remained in the commander's cupola directing the fire of his gunner toward the entrenched Viet Cong. His leadership and concern for his troops during close combat significantly limited friendly casualties ensuring a successful mission for the unit and earning him a Bronze Star Medal with V Device.

Joe again demonstrated gallantry in action on March 30, 1968. His unit was engaged in a reconnaissance in force operation along with an infantry element in the vicinity of Thu Due just north of Long Binh Post. As the combined unit traversed an area of open rice paddies, they came under attack by intense rocket, machine gun, and small arms fire by a large entrenched enemy force. LT Scates unhesitatingly maneuvered his armored vehicle between the enemy elements and the two infantry platoons in order to obtain a more favorable fighting position. Upon learning that several infantrymen were missing, LT Scates led his platoon back into the fray to search for the missing, wounded men. Maneuvering as close as possible, LT Scates dismounted his vehicle and ran across an open rice paddy to rescue the wounded soldiers. As he neared the safety of his armored vehicle, he observed another severely wounded Soldier to his front. With complete disregard for his own safety, he braved the hostile fire and saved the wounded warrior returning him to friendly lines. Yet again, Joe Scates proved his mettle in the face of close combat with a numerically superior hostile force. The Army awarded him the Silver Star Medal.

His demonstrated leadership skills and staff officer abilities moved Joe into key positions at the Office of Joint Chiefs of Staff and other high-level staff organizations where he became a renowned expert in force development.  After 24 years of loyal and dedicated service to the Army, Joe went on to serve as a civilian contractor in the defense community where he earned three U.S. patents for his force development computer models.