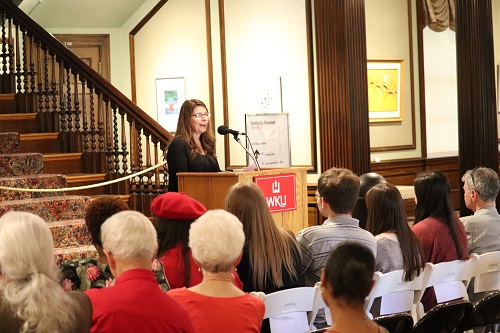 The English Department hosted the 23rd annual Mary Ellen and Jim Wayne Miller Celebration of Writing on Sunday, October 20th at 2:00 pm in the Kentucky Museum.

As part of the celebration, ten finalists were honored and three of those finalists won prizes.

Katy Yocom author of Three Ways to Disappear was the featured writer and judge for the contest. She was thrilled to be selected as this year’s guest writer and was impressed with the talent that the competition’s finalists displayed. While addressing the audience, Yocum said, “As part of my visit here today, I was given the honor of reading stories from ten of the current crop of WKU’s most talented creative writers and working with them in a workshop this morning. And I was given the difficult task of selecting three of their stories for special recognition.”

Mikaila Smith was awarded third place for “Blackfish.” Yocom said this is “a haunting tale with one foot in the realm of the fairy tale, with its distinctive psychic distance and nature motifs. In lyrical language, Mikaila’s story slips seamlessly between narrative summary—allowing months to pass in a paragraph, habits to be established in a sentence—and beautifully rendered scenes. This is a story of love and grief, solitude and connection, the value of a life, and humanity’s relationship with the other creatures who share this planet.”

Ella Corder was awarded second place for “Cigarettes and Coffee; Or, The Girl Who Was Psychologically Bound Against Ever Making One Single Decision; Or, The Mysterious and Gripping Self-Hatred Trifecta.” Yocom said the title “gives you your first taste of the story’s incredible voice, and you can just sit back and revel in the show, which takes place entirely over the course of three hours as a young woman lies in bed with a snoring young man she’d rather not be with, but whom she can’t quite bring herself to disturb.” She said the story is “pure jazz. Be-bop, to be specific, with its virtuosic, high-speed control of the instrument, its rapid-fire sense of play, its joy in picking up on a phrase and improvising just to see how fast and how far you can take it without missing a note.”

Alicyn Newman was awarded first place for “A Question of Stars.” Yocom noted that this is an “intimate family story, yes, but it plays out on the home front of an encroaching war. Alicyn’s skill in creating a world with just a few deft brushstrokes makes her story feel like the product of a much older writer. It’s remarkable the way she knows, for example, how simply having a character light oil lamps while military jets fly overhead is sufficient to tell us everything we need to know about the world we’re in: that it’s a version of our contemporary world, but one in which society has suffered a partial collapse.”

As part of her remarks, Ms. Yocom also provided some advice for writers and explained a few other “magic tricks that writing brings to the world.” One of the main tricks that Ms. Yocom discussed was empathy and the power that writing has to bring more empathy into the world. Ms. Yocom also read the opening of her debut novel Three Ways to Disappear, a story about a broken family and the lengths that they go to in order to find themselves again.

She closed by noting, “We write to teach ourselves that lesson over and over again. And if we practice our craft and develop our longevity sufficient to getting our work published, our writing tells our readers that story, over and over again. Our world may be a torn fabric, but every poem, every story, is one small stitch in the enormous and vital repair job of mending it.”