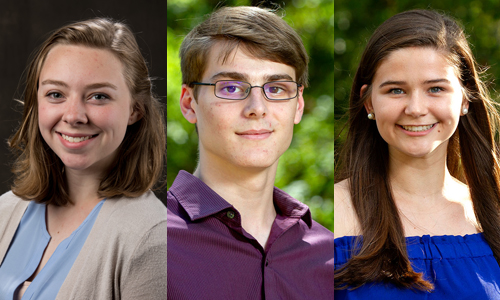 Megan Dillingham, the daughter of Chris and Catrice Dillingham, is studying biochemistry as a junior in the Honors College at WKU. She plans to pursue an MD and a PhD in systems biology to research cancer evolution.

Dillingham has conducted research at WKU with Dr. Sigrid Jacobshagen, professor of Biology, and Dr. Rodney King, professor of Biology. She also participated in WKU’s Genome Discovery and Exploration Program. Additionally, she completed two summer internships in the Johnathan R. Whetstine Laboratory at Massachusetts General Hospital Cancer Center and Harvard Medical School in Boston. Dillingham has presented her research at two academic as well as student conferences and also studied abroad in Kenya.

"I am delighted that Meg, an amazing and highly deserving undergraduate, has received this prestigious scholarship," said her mentor, Dr. Whetstine. "Meg is a fantastic student and trainee. She is a highly motivated student with such devotion to science and a desire for a long term career in science and medicine. I am thrilled that our paths crossed, and that I can be a mentor to her now and in the future."

Alexander Stewart, the son of Jennifer and Thomas Stewart, studies molecular biotechnology as a WKU sophomore and Gatton Academy of Mathematics and Science student. He will pursue a PhD in virology and conduct research on virus structure.

Stewart has conducted research at WKU with Dr. Claire Rinehart, professor of Biology, and Dr. Noah Ashley, associate professor of Biology. He also participated in the Genome Discovery and Exploration Program. Stewart will continue research at the University of Kentucky this summer in the Mark Farman laboratory. As a WKU student, Stewart has published his research, presented at four academic conferences, and also studied abroad in England.

“Working with Alex is like trying to keep up with an energetic, bouncing puppy who is forever curious and always finding new fascinating things,” said his mentor, Dr. Rinehart. “I just point him in a direction and he is off to explore and discover the unknown. He has been a delight.

Sydney Wheeler, the daughter of Michelle and David Wheeler, studies psychological science as a WKU sophomore and Gatton Academy of Mathematics and Science student. She will pursue a PhD in neuroscience and a career conducting research to understand the effects of aging on human perceptual abilities.

Wheeler has conducted research at WKU with Dr. Farley Norman, University Distinguished Professor in the Department of Psychological Sciences. As a WKU student, Wheeler has published her research, presented at two academic conferences, and also studied abroad in Costa Rica and England.

“Sydney is an outstanding and highly talented student who makes a tremendous contribution to my laboratory’s research efforts,” said her mentor, Dr. Norman.

“It is very exciting to see three of our nominees chosen as Goldwater Scholars this year,” said Dr. Kevin Williams, Chemistry Professor and WKU’s Faculty Representative for the Goldwater Scholarship Program. “We had a very strong pool of applicants overall, and all of them were representative of the high quality of student-centered research we have at WKU. These winners and their mentors are to be commended for all their hard work to achieve such prestigious national recognition.”

Since 2007, 38 WKU students have been recognized in the Goldwater Scholarship competition. All of the students sought guidance from Dr. Audra Jennings, director of the Office of Scholar Development, in preparing their Goldwater scholarship applications.