Biology student reflects on returning home to the Hill 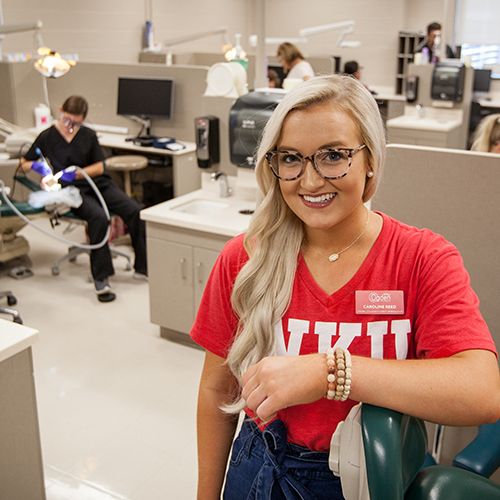 Leigh ‘Caroline’ Reed, a junior biology major and Honors College student from Lebanon, Ky. serves as an Ogden College Student Ambassador, a student leader that assists with recruitment and retention for the college.

Reed has a unique perspective to offer in her role as student ambassador, one that includes transferring back to WKU after being away for one semester at UK last fall.

Reed said her semester away made her realize that WKU was home.

“While I was away I had this feeling that I was missing out on something. I would often catch myself texting my friends from WKU. I wanted to know what they were doing, and I was always so intrigued by what WKU had going on,” said Reed.

Reed, who aspires to attend dental school after graduation, said that while some of the classes at WKU in her biology major and chemistry minor have larger numbers, they aren’t nearly as large as the class sizes she had at UK. She said that WKU’s smaller class sizes was one reason she wanted to return.

“The best part of my experience at WKU so far has been in the last year,” said Reed. “Coming back, being reunited with the WKU community, and realizing that this is my home was a wonderful feeling. This is where I’m supposed to be. I realized how much I truly love this place!”

Being a part of a tight-knit community is one of the many benefits Reed is experiencing at WKU. She is also furthering her knowledge in the field by participating in applied learning. She recently had the chance to volunteer for a medical brigade to Panama for a week through Global Brigades at WKU. During the trip, Reed worked in a medical clinic, specifically a dental station giving fluoride treatments to children. She said she hopes to have the opportunity to go abroad again through a Study Abroad program sometime before she graduates in 2021.

In addition, Reed is one of the many biology students getting a practical look at a focused field of study through a practicum. She is completing her practicum with a local pediatric dentist, Dr. Scott Barbee at Barbee Dental. The course requires hours of observation and training. She said it’s been a great way to establish a mentorship with a practitioner in her field.